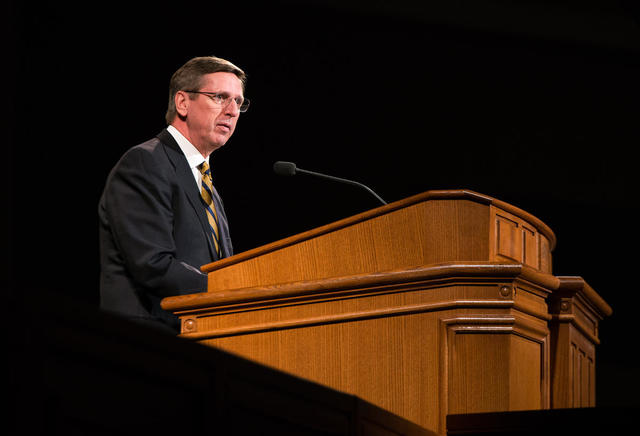 Elder Kevin W. Pearson, a General Authority of the Seventy, recently spoke at a BYU-Idaho devotional. During his address, Elder Pearson explained how members can look through the "lens of truth" and avoid deception in our lives. He also gave six key ways members can survive spiritually and be masters of their own fates and souls.

While speaking in a stake conference, Elder Pearson noticed a little girl looking at him through what appeared to be a kaleidoscope. “As I stood there at the pulpit, I concluded that everyone was looking at me through a different lens,” he said. While some looked through the lens of struggle, doubt or disbelief, others seemed to have faith and hope in his message. And others were focused on their cellphones.

Elder Pearson then asked, “What lens are you looking through?”

Recent research shows that the average young single adult spends nearly nine hours a day immersed in music, games, virtual entertainment and social media. “Media is a powerful lens,” Elder Pearson said. “It changes the way we all see and understand the world. However, it is not the right lens to find and understand the truth about your divine destiny and purpose.”

“Truth is knowledge of things as they really are, not as we want them to be,” Elder Pearson said. “As such, truth is rarely popular, it can even at times feel hard, unbending and uncompromising. Truth withstands the test of time and eternity. Thus, it frees us from the consequences of error.”

In order to work properly, a lens needs light. Just as a physical lens filters and focuses light, a spiritual lens uses the light of Christ to illuminate truth. “Each of us is endowed with the Light of Christ, the ability to discern spiritual light and truth. Our spiritual eyes, however, have two lenses...,” Elder Pearson said. “Heavenly Father sends divine light into our minds and hearts. Through these lenses, principles of truth are transformed into understanding, knowledge and conviction.”