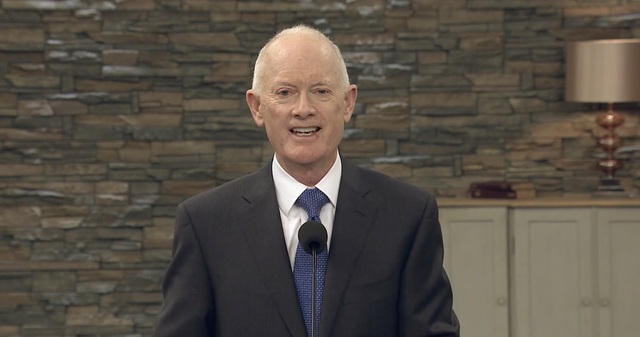 Elder Kim B. Clark knows a thing or two about the business world. As the former dean of Harvard Business School, he has watched the things that make people successful and the things that are often sacrificed on that road to success. He recently shared a number of lessons he’s observed on the new Latter-day Saint MBA podcast.

When host Kurt Francom sat down with Elder Clark, who was also the former president of BYU–Idaho, Francom was anxious to get to the first point on Elder Clark’s lessons for those seeking a career in business: “Beware of the Joseph syndrome.”

“Joseph is Joseph in Egypt and through really miraculous events, he became the second-most powerful man in Egypt and saved his family and a whole nation of Egypt. So [the] Joseph syndrome is that . . . we get it into our heads that if we can get into positions of power, we can do great things for family and therefore we kind of get the idea that if we sacrifice the things, like our family, the Church, and so forth, on our way to power, it’s okay,” he said.

He says he has watched as people become semi-active in church, spend lots of time at work, neglect their families, etc., but they become very successful in the business world—all with the idea that they will do great things for the Church.

“This is a false doctrine,” Elder Clark teaches. “The only way Joseph got where he was was by being obedient to the commandments of the Lord and by being absolutely steadfast in his faith. And so we just have to really beware of that and it’s very intoxicating.”

He goes on to say, “If you’re not careful, you start to rationalize spending too much time and focusing too much of your loyalties and your energies on things that are of the world and you forget what’s most important.”

Elder Clark then explains that you avoid this Joseph syndrome in life by making the things that are eternal the framework of your life from the beginning. He also outlines the simple things that have the ability to make a big difference: “Reading your scriptures every day, saying your prayers—praying to the Lord, talking over things with Him, repenting every day, partaking of the sacrament, serving other people, taking callings in the Church whenever you’re asked, do your ministering visits—watch out and care for other people, go to the temple—participate in those sacred ordinances.”

Some of these things pertain to family: “Having a date night with your wife, . . . spending time with your kids, working with them in the yard, playing golf with them, going on vacations . . . you build your life around that. Work supports it, but work is not your life.”

Elder Clark teaches that in the early years of your career, you are actually establishing patterns that will last.

“So it’s a mistake to imagine, ‘Well, I’m going to live my life this way while I’m in school or while I’m in my early career and then later I’ll do this.’ That doesn’t work. You’ve got to establish it early on,’” he said.