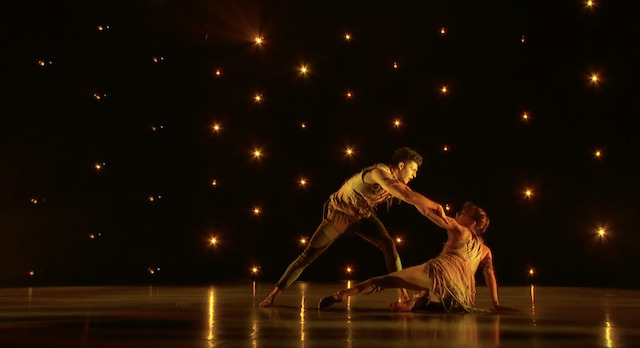 "You Are Absolutely Inspiring": Judges Praise Latter-day Saint Eliminated from "So You Think You Can Dance"

Latter-day Saint Ezra Sosa wiped away tears as he finished what would be one of his last performances on So You Think You Can Dance.

And he wasn't the only one. The show's judges also had tears in their eyes as they gave a standing ovation for Sosa and his partner, Gaby Diaz, the So You Think You Can Dance winner of season 12, for their contemporary performance to “Ne Me Quitte Pas” by Jacques Brel.

"This is your night; this is love pouring out of you. It was so passionate,” judge Mary Murphy said.

"You are so absolutely inspiring. I believe, to me when I see this piece, it kind of represents not just your own past but this whole competition for you,” judge Dominic Sandoval said. “Constantly you’ve been in the bottom and week after week you’ve always used that pain as something as an opportunity to overcome and win, and to me that is what makes a winner, not winning the show.”

And Sosa has faced his share of challenges and triumphs while on the show. From mastering difficult choreography to surviving the bottom week after week, Sosa showed a caliber of talent the judges couldn't help but praise. But the Sosas had to overcome more personal challenges before even auditioning for the show.

Last year, Ezra's brother, Tristan, had competed on So You Think You Can Dance, and one day shortly after he was eliminated from the show, Tristan suddenly stopped breathing and had to be taken to the emergency room.

“They found 12 blood clots in his lungs. Not one, 12,” said Enrique Sosa, Ezra and Tristan's father. Then, in August 2018, the siblings' mother, Lucy Sosa, suffered a stroke. All the Sosa siblings began pitching in to help cover the family's medical expenses.

“I prayed and I knew deep down that everything was going to be okay and just continue being a good person and living by the faith. I was in comfort knowing that [God] was by our side and He had my back,” said Stephanie Sosa.

Tristan agreed: “Having my faith in Heavenly Father and knowing that He can perform miracles and being able to give me the comfort in hopefully knowing everything is okay as well as just praying—that’s something that has helped me a lot."

Faith and prayer helped the Sosas survive this difficult time, but when it came time to decide whether Ezra and Stephanie should audition for So You Think You Can Dance, Ezra remembered what his mother told him soon after her stroke: "Keep on dancing. Keep on doing what you love."

► You'll also like: How Faith Helped 3 Siblings on So You Think You Can Dance Overcome 2 Family Medical Emergencies

And Ezra followed his mother's advice, receiving the praise of judges from day one.

But in the end, it was voters who decided Sosa's fate.

Even after a stunning disco duet with Madison Jordan that earned the praise of all three judges, a stunning solo ballroom routine, and a group performance with the top three male competitors, Sosa was eliminated just before the final four.

But despite his time on the show coming to an end, Sosa expressed gratitude for being able to compete on the show he says he always dreamed he would be a part of.

“I just feel so honored to be here and to show my love for dance to America,” Sosa said after his elimination. “Not only that but to share the stage with such amazing contestants—but mostly to share with my sister—this is a dream I’ll never forget, so thank you guys so much.”

► You'll also like: Latter-day Saint Siblings Make History in the Top 10 of So You Think You Can Dance

And that ends my journey on @danceonfox ... when I was a kid being on this show was a dream I had to accomplished ever since I saw it for the first time. Sitting there with my sister watching the show I remember saying, “One day we will be up there.” And I never thought in a million years I would get that chance. Yet I did. I wanna thank everyone who made this dream come true. To my beautiful partner @madisonrosejordan who stuck by my side during this competition. Getting to know you and your strength and inner beauty has been such an honor. The moments we shared on stage are ones I’ll never forget. I want to thank all the crew members and producers on the show for caring for us and made sure our voices were heard. Out of all the shows I had the privilege working on SYTYCD was the best by far because of the environment they built. I want to thank all the choreographers. People I looked up to ever since I could remember, getting to work with all of you has been such an honor. Thank you to EVERYONE who supported me and made me feel loved. None of it goes unnoticed. Lastly I want to thank my sister. Thank you for being the best sister. Thank you for being you and caring for me in this journey. Thank you for being apart of my dream and making it a reality. To the top 10 I feel so blessed to share the stage with you all. You are all now my family. To the Top 4! You are all so deserving of this and I’m so happy you all made it! I will be rooting for you all next week! Love Ez ❤️ #sytycd @danceonfox #dancelife @sosasiblings #sosasiblings