This story originally ran on LDS Living in 2017 but has been updated to include more recent guests.

In its over 170 years of performing, the Tabernacle Choir at Temple Square has toured the world, sung at presidential inaugurations, and inspired millions through their weekly broadcast, Music and the Spoken Word—the world’s longest continuously running weekly network broadcast. On top of that, the choir has also hosted dozens of famous people at its annual Christmas concert over the years, from actors and singers to journalists and even the Muppets® from Sesame Street®.

Here is what some of these famous guests had to say about their experience performing with “America’s Choir.” 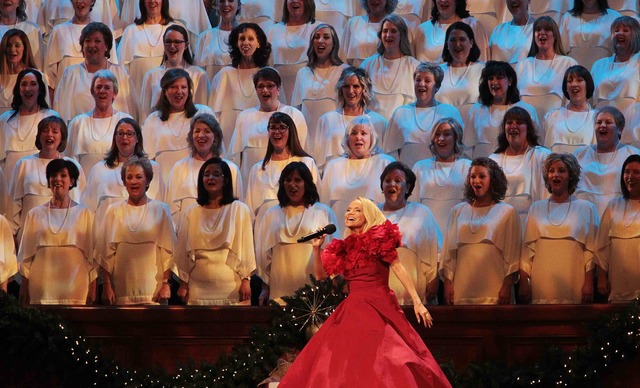 Kristin Chenoweth, best-known for her roles in Wicked and You’re a Good Man, Charlie Brown, called performing with the Choir “a bucket list item," at a press conference last year. As a kid she watched three shows growing up: The Tabernacle Choir Christmas special, the Miss America pageant and the Tony Awards.

“That says everything you need to know about this girl right here,” Chenoweth said at the press conference.

Learn more about Chenoweth's experience performing with the Tabernacle Choir through her interview on the "All In" podcast.

The Tabernacle Choir and Orchestra at Temple Square join with superstar singer Kristin Chenoweth for a Christmas performance before a combined audience of 60,000. This show sparkles with excitement as Kristin’s renditions of Christmas classics breathe new life into old favorites. Available now at Deseret Book stores and at DeseretBook.com.