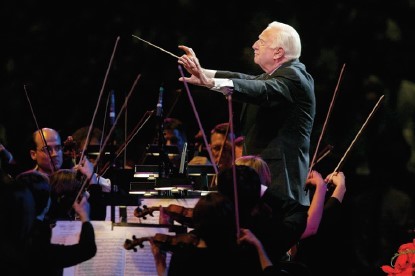 Photo by Stuart Johnson, courtesy of the Deseret News

Broadcast journalist Walter Cronkite, once dubbed the “most trusted man in America,” not only appeared with the Tabernacle Choir in 2002 but was given the opportunity to conduct the group. During his 19 years working as an anchorman for the CBS Evening News, he reported on everything from President Kennedy’s assassination and Martin Luther King Jr. to Watergate and the U.S. space program. He was awarded the Presidential Medal of Freedom in 1981, received four Peabody Awards, and became the first non-astronaut to receive NASA’s Ambassador of Exploration Award. When referring to his appearance with the Tabernacle Choir, he recalled in an interview, “It was one of the greatest experiences of my life (and I think I can claim a lot of experiences at this advanced age).” He continued, “I think that this choir undoubtedly has an importance greater than entertaining or even momentarily uplifting an audience present for the broadcast of the concert itself in this magnificent hall in which it appears. It has a lasting influence on America. It maintains and upholds the standard of ecclesiastical music and other music as well in a way that is needed today.” Cronkite passed away in 2009 at age 92.