In 2013, the actor who played Gimli, the famous dwarf from the Lord of the Rings trilogy, thrilled audiences when he joined the Tabernacle Choir for an unforgettable performance. Gracious and kind, John Rhys-Davies donned a colorful robe and played the role of the Ghost of Christmas Present in a dramatic representation of A Christmas Carol. In the cinematic world, Rhys-Davies has also had notable roles in the Indiana Jones series and has voiced several characters for Disney. In addition, the actor was nominated for an Emmy in 1981.

In a behind-the-scenes interview with the choir, he shared, “Anyone who knows about choral music has to know that the Tabernacle Choir has for years been a wonderful choir. The music is magnificent, and I cannot tell you—the presentation, the professionalism, the quality—what an experience. What an experience! Oh, dear me.” Rhys-Davies, who recently had another experience with the LDS community when he starred in a one-hour BYUtv production called Winter Thaw, shared his thoughts about Latter-day Saintswith LDS Living, saying, “You’re a strange community to us on the outside, but I fi nd you very warm and very welcoming and very friendly—a considerate people.” He continued, “I like you. And you make it very clear you are willing to put up with me despite the fact that I am far less godly than you guys are. . . . I’m not just blowing smoke at you—it’s true. You are an odd lot, but you make me welcome and I like you.” 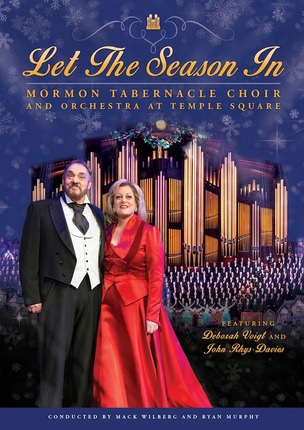 In Let the Season In, The Tabernacle Choir and world-renowned vocalist Deborah Voigt and charismatic voice actor John Rhys-Davies, usher in the holiday season with music that celebrates the work of Charles Dickens, the story behind A Christmas Carol, and many other classic Christmas tales.