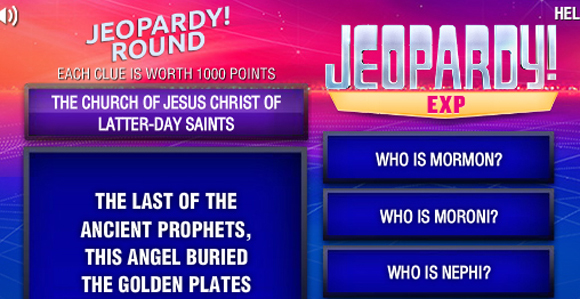 11 Church-Themed Questions That Have Been Asked on "Jeopardy!" (+ the Answers)

Did you know Jeopardy! has included many references to Latter-day Saint culture? During the 30th season of the popular game show, “The Church of Jesus Christ of Latter-day Saints” was featured as a category in an episode broadcast on October 15, 2013. Producers from Jeopardy! worked with representatives from LDS Public Affairs to accurately represent facts, images, and videos about the Church. Other episodes throughout the show’s history have included Latter-day Saint references in categories such as “Religion,” “The Book of Mormons,” and “American History.”

The game show claims another association with Latter-day Saints—the contestant who holds the longest winning streak is a member of the Church.  Ken Jennings, a graduate of Brigham Young University, became a Jeopardy! superstar when he set a record of 74 consecutive victories in 2004.  Jennings told LDS Living about his experiences sharing his beliefs on the show:

Below is a list of some questions with Latter-day Saint references that have been featured on Jeopardy!. Test your knowledge of Latter-day Saint trivia and learn some new fun facts about Church history!