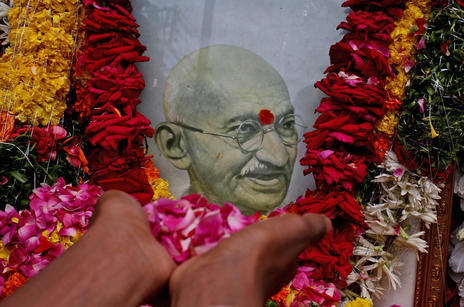 11 Quotes from Ghandi on Religion

MR says: There are many sources of goodness and light in this world, including the lives of remarkable men and women who have sacrificed for the good of others. There is much we can learn from their wisdom and many new insights we can gain from their different perspectives. Ghandi is among one of the most influential thought-leaders of our time. His wisdom is timeless.

Many of Gandhi’s messages and writings stemmed from different religions, according to BBC. For example, the idea of “do no harm” likely came from ‘Ahimsa,’ a practice by Jain believers who want to protect all souls, BBC reported.

“Gandhi hoped to win people over by changing their hearts and minds, and advocated non-violence in all things,” BBC reported. “He himself remained a committed Hindu throughout his life.”

To celebrate his birthday [this month], we’ve pulled together 11 quotes about religion the peacemaker said during his life.

"Religion is a matter of the heart. No physical inconvenience can warrant abandonment of one’s own religion." — Patheos

"Faith is put to the test when the situation is most difficult." — Patheos