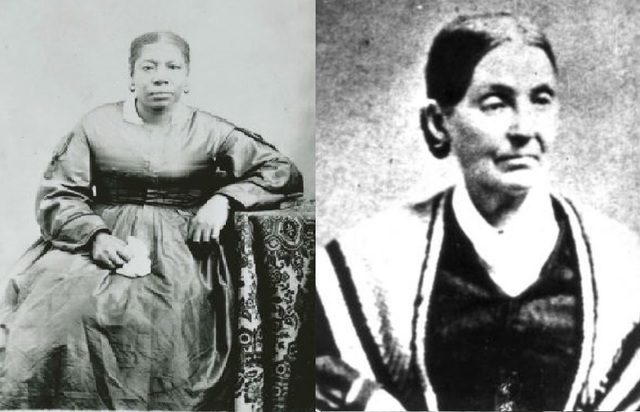 12 Facts to Know Before You See "Jane and Emma"

The new movie highlighting the relationship between black convert Jane Manning James and Emma Smith, wife of the Prophet Joseph Smith, comes out in only a few short days (click here for more information on where you can watch it starting October 12, 2018!). The story truly lets you see these two women in Church history with all their flaws and strengths as you watch them grapple with the nuances of their faith in the gospel of Jesus Christ and their love for the martyred prophet during a fictionalized account of a night spent guarding Joseph Smith’s body after his death. While the night itself is not found in the history records, the emotions, stories of Jane and Emma’s previous interactions, people, and much of the dialogue comes straight from accounts left behind by those who lived early Church history, brought to life in the poetic, visual world of film. Here are a few of the true facts from Church history that you will find in Jane and Emma.

1. Joseph Smith was the Mayor of Nauvoo at the time of his death.

This is one of the reasons that he was able to order the destruction of the libelous Nauvoo Expositor in an attempt to squelch potential mob action that the newspaper might incite. Read more about this incident, which is briefly alluded to in the film and which led to Joseph and Hyrum’s incarceration in Carthage, on lds.org.

2. Joseph and Hyrum Smith’s bodies were returned to Nauvoo the day after they were killed.

As it states in a Church manual on lds.org,

“On the morning of 28 June 1844, the bodies of the slain leaders were gently placed on two different wagons, covered with branches to shade them from the hot summer sun, and driven to Nauvoo by Willard Richards, Samuel Smith, and Artois Hamilton. The wagons left Carthage about 8:00 a.m. and arrived in Nauvoo about 3:00 p.m. and were met by a great assemblage.”

3. A funeral with decoy caskets was held after the viewing.

Even in death, Joseph was not safe. As the film mentions, there was a price on his head, and the threat of someone trying to steal the corpse was very real. In fact, Joseph and Hyrum were first buried in secret in the basement of the Nauvoo House while caskets filled with sand were buried in the Nauvoo Cemetery after the public funeral. Emma later had their bodies moved to an outbuilding on the Smith property.

►You may also be interested: Joseph and Hyrum's Death Masks: 5 Things You Didn't Know

While this fact is described in the film as well, it is interesting to know that Jane was born in Wilton, Connecticut, and lived as a servant in a white farmer’s home. She was a member of the Presbyterian church before hearing Elder Charles Wandell preach the gospel. Listen carefully for mention of Elder Wandell in Jane and Emma.

5. The Manning family was traveling with a group of Saints from their branch when they were denied passage on the canal boat.

After an uneventful canal ride to New York, canal officials demanded the Manning family pay the rest of their passage in advance, but the Mannings had insufficient funds. None of their white branch members had to do so, and Elder Wandell, the missionary who had first taught the Mannings and who served as branch president and leader of the group, refused to help them. Read more about this incident in Saints chapter 41.

When the Manning family reached Illinois, they were threatened with jail for not having “free papers.” Fortunately, they were able to convince their detainers that the family had been born free and did not need “free papers.” This incident is alluded to in the film. Read more about it in Saints chapter 41.

7. Jane lived with Brigham Young’s family between the martyrdom and the exodus.

As is portrayed in the film Jane and her sister, Angeline, left Nauvoo for a time, during which Joseph and Hyrum were killed. Of their death Jane recalls:

Jane soon followed and lived out the rest of her life in the Salt Lake Valley.

8. Jane was able to do baptisms for the dead for some of her family in the temple.

Though she was denied permission to be endowed and sealed, Jane remained a faithful member of the Church in Salt Lake City for over 52 years, and according to her own history, “I have had the privilege of going into the temple and being baptized for some of my dead.”

9. Emma asked Joseph to turn himself in at Carthage.

After the destruction of the Nauvoo Expositor, Governor Ford demanded Joseph and Hyrum turn themselves in to be tried. Joseph knew that many people wanted him dead, so he doubted the governor’s ability to keep a promise of protection if they turned themselves in. But staying in Nauvoo was also not an option, as it might draw more mobs to the city, and so it seemed that the best way for Joseph to protect his family and the Church members was to leave the city and head for the West. The new Church history Saints describes:

“That night, after saying goodbye to his family, Joseph climbed into a skiff with Hyrum, Willard Richards, and Porter Rockwell and set out across the Mississippi. The boat was leaky, so the brothers and Willard bailed water with their boots while Porter rowed. Hours later, on the morning of June 23, they arrived in Iowa Territory, and Joseph instructed Porter to return to Nauvoo and bring back horses for them.

“Before Porter left, Joseph gave him a letter for Emma, instructing her to sell their property if necessary to support herself, the children, and his mother. ‘Do not despair,’ he told her. ‘If God opens a door that is possible for me, I will see you again.’

“Later that morning, Emma sent Hiram Kimball and her nephew Lorenzo Wasson to Iowa to convince Joseph to come home and turn himself in. They told Joseph that the governor intended to occupy Nauvoo with troops until he and his brother Hyrum gave themselves up. Porter returned soon after with Reynolds Cahoon and a letter from Emma, again begging him to return to the city. Hiram Kimball, Lorenzo, and Reynolds all called Joseph a coward for leaving Nauvoo and exposing the Saints to danger.

“’I will die before I will be called a coward,’ Joseph said. ‘If my life is of no value to my friends, it is of none to myself.’ He knew now that leaving Nauvoo would not protect the Saints. But he did not know if he would survive going to Carthage.”

Read more on this event in Saints, available on the Gospel Library App or in hard copy at deseretbook.com.

10. Emily and Eliza Partridge had been hired on by Emma to help take care of her newborn son, Don Carlos.

The sisters remained in the Smith home even after the baby died, and they were privately sealed to Joseph Smith in 1842 at ages 19 and 23.  Two months later, Emma approached the sisters, taught them about plural marriage, and told them that she would allow them to be sealed to Joseph. The sisters said nothing of their previous sealing and were sealed to Joseph again with Emma as a witness. Emma had a difficult time with plural marriage and resented the presence of Joseph’s other wives in her household. At one point, she demanded that Emily and Eliza leave the house for good and end their relationship with Joseph. Though Emily refused to break her marriage covenant, they did leave the house. Years later, after Joseph’s death, Emily Partridge recalls visiting Emma and her newborn, David Hyrum Smith, before traveling west with their hard feelings reconciled. Read more about these events in Saints chapter 40, 41, and 46.

11. William Clayton was a factory clerk who was called to be a counselor to President Joseph Fielding in the Preston England Mission in 1838.

William Clayton later became Joseph Smith’s clerk in 1840 after he moved to Nauvoo, and he continued to act as clerk and scribe for the Church even after Joseph’s death. Clayton is perhaps best remembered for writing “Come, Come, Ye Saints.” Listen for his name in Jane and Emma.

12. The Nauvoo Mansion House was meant to house many people.

Send us a comment to tell us what you thought of the movie or what other facts you wish would have been on this list!