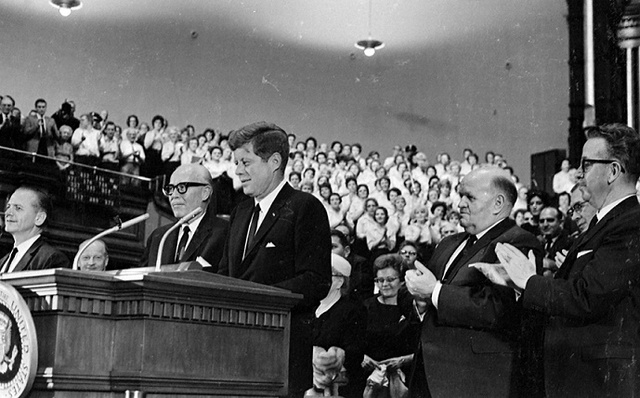 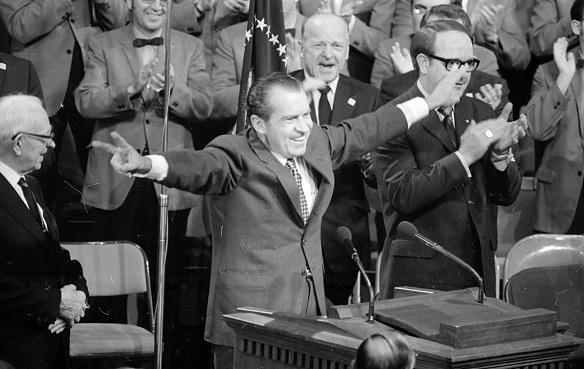 Photo from When the White House Comes to Zion, courtesy of Ronald L. Fox

Though President Richard Nixon spoke at the Tabernacle as a presidential candidate twice before, October 31, 1970, was his first time speaking from the pulpit as the President of the United States. Since America was in the midst of the Vietnam War, the president gave an update on progress towards peace. Always enamored by the Tabernacle Choir, President Nixon said in the introduction to his speech:

“I would like to pay my respects, too, to those who have preceded me on the program, to the magnificent Tabernacle Choir. I was so honored that they came to our inauguration. And I hope they sing another number at the conclusion of my speech. I am going to quit a little early so they can have the time.”

He concluded by paying high tribute to the religiosity of the Latter-day Saints:

“As you know, we have instituted a custom of having worship services in the White House, and we have taken a little heat for that, as you do for making any new breakthrough or new decision. We have done it because I felt it was important to bring to the Nation's Capital representatives of various faiths, and most have been represented, but particularly to bring right to the White House, where the President, members of the Cabinet, the members of the diplomatic corps, the Members of the Congress, Democrat and Republican, could be reminded of the fact that while this Nation is the strongest nation in the world and the richest nation in the world, that all the wealth and the strength in the world is as nothing unless the spirit of America is sound and good.

“And I do not know of any group in America—and I would say this not only here, but in other places in this country—who have contributed more to that strong, moral leadership and high moral standards, the spirit that has kept America going through bad times as well as good times—no group has done more than those who are members of this church."