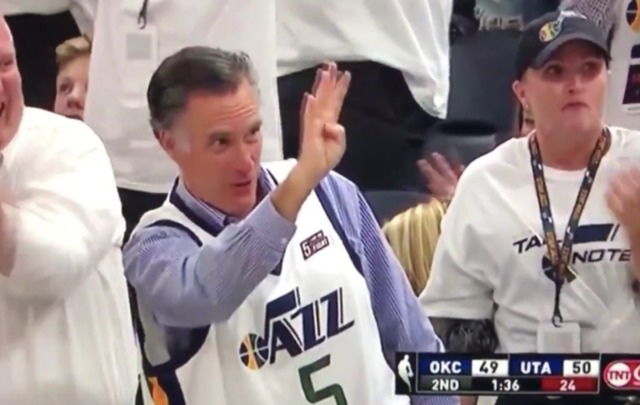 Last night's Utah Jazz playoff game was brutal. Even though the Jazz came out on top, there were definitely some tense moments when the Oklahoma City Thunder rallied. And then, of course, there were the fouls, as Mitt Romney so clearly pointed out.

If you have seen it already—which you probably have—a video showing Mitt Romney taunting Oklahoma City after Russell Westbrook received four fouls in the first half has gone viral, with plenty of hilarious Twitter reactions to boot.

Here are just a few we thought were too hilarious not to share:

Mitt Romney heckled Russell Westbrook while sitting courtside at the Jazz-Thunder game — and the internet lost its mind https://t.co/EXTIrIsLhqpic.twitter.com/gvKqhBhsmj

no amount of triple doubles can make a soul come to terms with that pic.twitter.com/dllLGHBpM6 — Hanif Abdurraqib (@NifMuhammad) April 24, 2018

When I said the Thunder/Jazz game was going to be must watch even I didn’t expect Russ to be taunted by Mitt Romney for getting 4 fouls in the first half pic.twitter.com/PniVqAqrT9 — Big Cat (@BarstoolBigCat) April 24, 2018

I am sitting on my couch crying from laughing so hard at Mitt Romney taunting Russell Westbrook. Just when you thought you'd seen it all ...

TORONTO HAS DRAKE BUT SALT LAKE HAS @MittRomneypic.twitter.com/ndzsBSiMVT — in need of a vacation (@kingSCHARF) April 24, 2018