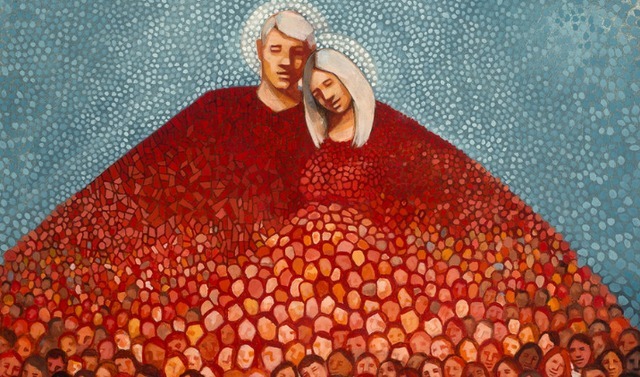 “Mention of Heavenly Mother did first appear in a publication while Joseph Smith was alive,” Pulido says. While many are familiar with Eliza Snow’s hymn “O My Father,” her famous poem was not the first recorded mention of Heavenly Mother. “The first account was February 1844, four months before Joseph died, in a poem by William W. Phelps [published in the Times and Seasons]. It has a beautiful scene where Heavenly Mother submits to Her Son to be sent to save us. Joseph Smith was the editor of the Times and Seasons, so he would have been aware of this poem. Phelps also ascribed the truth of a Heavenly Mother to Joseph Smith later that year in December 1844, and the following year.”

Many other records also reveal that Joseph Smith taught about our Heavenly Mother to others. For example, Joseph Smith spoke about our Heavenly Mother to the third Relief Society president of the Church, Zina D. Young. After losing her mother to "the most trying of circumstances," Zina was speaking to the prophet about her intense grief and asked the question: "Will I know my mother as my mother when I get over to the Other Side?"

To which Joseph Smith responded, "Certainly you will. More than that, you will meet and become acquainted with your eternal Mother, the wife of your Father in Heaven" (History of the Young Ladies' Mutual Improvement Association of the Church of Jesus Christ of L.D.S., from November 1869 to June 1910, 16).

6. Truth—Our Heavenly Mother is intimately involved in our lives now.

President Harold B. Lee taught, “Sometimes we think the whole job is up to us, forgetful that there are loved ones beyond our sight who are thinking about us and our children. We forget that we have a Heavenly Father and a Heavenly Mother who are even more concerned, probably, than our earthly father and mother, and that influences from beyond are constantly working to try to help us when we do all we can,” (“The Influence and Responsibility of Women,” Relief Society Magazine 51).

► You'll also like: 11 Powerful Truths About Our Heavenly Mother from Prophets and Apostles

Speaking beautifully and poetically of our Heavenly Parents’ love, Elder Jeffrey R. Holland compared his and his wife’s love of their children to the infinitely greater capacity of our divine Father and Mother:

“To my beloved Pat and me, our children are more precious possessions than any crown or kingdom this world could offer. There is literally not anything in righteousness we would not do for them; there is no stream so deep nor mountain so high nor desert so wide that we could be kept from calming their fears or holding them close to us. And if we ‘being evil’ can love so much and try so hard, what does that say of a more Godly love that differs from our own as the stars differ from the sun? On a particularly difficult day, or sometimes a series of difficult days, what would this world's inhabitants pay to know that heavenly parents are reaching across those same streams and mountains and deserts, anxious to hold them close?” (“The Meaning of Membership: A Personal Response,” However Long and Hard the Road).

7. Truth—Heavenly Mother changes our ideas of the nature of God and what godhood means.

The BYU Studies article “A Mother There” also illuminates this idea, stating, “It should be no surprise, then, that most Mormon leaders could not understand how Father or Mother could be divine alone. For either to be fully God, each must have a partner with whom to share the power of endless lives.”

How does this idea of Heavenly Parents—two divine beings working together to bring about our happiness and exaltation—change the way we envision deity?

While Heavenly Mother and Heavenly Father are different, distinct beings, they willingly join together, opening themselves not only to each other but to us. “God's oneness is a voluntary coming together—a marriage and preservation of differences. . . . In that view, no person removed from others or the world is a God. To be a God means to be intimately bound up in a relationship with another,” Pulido says. “To be divine we have to be open to another, which means allowing ourselves to suffer—like when God cries over the world in the Book of Moses. In traditional mainstream Christianity, God cannot be influenced by the world at all. He influences it through pure activity. He affects everything, but nothing affects Him. That is not how we understand God at all. He acts for sure, but He is also acted upon by the Mother, by us, by everyone. He is an incredibly affected, emotional being.”

8. Myth—By not praying to Heavenly Mother, we belittle Her glory or contribution.

“Latter-day Saints direct their worship to Heavenly Father, in the name of Christ, and do not pray to Heavenly Mother. In this, they follow the pattern set by Jesus Christ, who taught His disciples to ‘always pray unto the Father in my name.’ Latter-day Saints are taught to pray to Heavenly Father, but as President Gordon B. Hinckley said, ‘The fact that we do not pray to our Mother in Heaven in no way belittles or denigrates her.’”

Likewise, we do not pray to Jesus Christ or the Holy Ghost; we are not suggesting they are less divine by doing so. This does not preclude us from mentioning our Savior, the Holy Ghost, or Heavenly Mother within our prayers. Nothing we can do or say could detract from the glory, power, and love of our Mother in Heaven, and while we follow the example of our Savior in praying to our Heavenly Father, there are many ways we can incorporate Heavenly Mother in our worship—including remembering Her role in our creation and the plan of salvation, thinking of Her in the temple, mentioning Her in our prayers, being mindful of Her as we read the scriptures, cultivating gratitude for all She has done for us, and searching for Her influence in our daily lives.

9. Truth—Our Heavenly Mother can help us understand our own identity and what we are capable of.

“As man now is, God once was: As God now is, man may be.” Many Latter-day Saints are familiar with this couplet created by President Lorenzo Snow, one which was inspired by the King Follett Sermon given by Joseph Smith. But the meaning behind this phrase deepens and broadens when we begin to understand God as a Heavenly Father and Mother, united in purpose and Their love for us.

Understanding this truth changes how we see and interact with one another by helping us understand there is divinity within every person. “Our highest aspiration is to become like our heavenly parents, which will empower us to perpetuate our family relationships throughout eternity,” President Dallin H. Oaks shared.

“We are children of God with a spirit lineage to Heavenly Parents,” President Oaks during general conference. “When we understand our relationship to God, we also understand our relationship to one another. All men and women on this earth are the offspring of God, spirit brothers and sisters. What a powerful idea! No wonder God’s Only Begotten Son commanded us to love one another. If only we could do so! What a different world it would be if brotherly and sisterly love and unselfish assistance could transcend all boundaries of nation, creed, and color.”

Viewing each other not only as brothers and sisters but as souls with the potential to become gods and goddesses can humble and transform us as well as deepen our relationships—including with ourselves. As Pulido say, “The doctrine of spirit birth from divine Parents brings this feeling of belonging and feeling you are indebted to something greater than yourself. This relates to what philosopher Lisa Guenther has noted, which is a central ingratitude arising in humans from forgetting those who sacrificed to make them. For her, birth is an irreplaceable gift-event known as ‘being-from-others.’ The gift is the possibility to have possibilities, and this is not a gift I can repeat, reject, or repay.” No matter what relational challenges, abuse, or struggles we might experience, we can find comfort in knowing we have perfect Heavenly Parents whose love and power are unending—and who both see limitless potential in us.