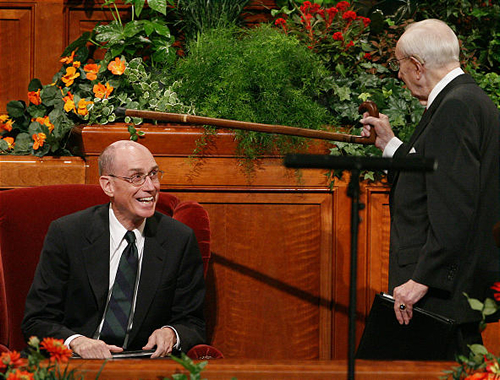 13 Conference Moments No One Saw Coming

1. When President Nelson announced that home and visiting teaching were being discontinued. 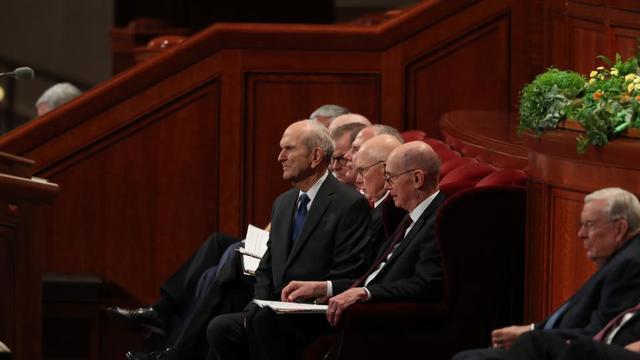 Every session of President Russell M. Nelson's first general conference as prophet included a mic drop moment heard 'round the world.  Among them was when he announced in the Sunday afternoon session of April 2018 general conference that the Church’s home and visiting teaching programs "will be replaced by a coordinated, more personalized approach known as 'ministering.'"

“For months, we have been seeking a better way to minister to the spiritual and temporal needs of our people in the Savior’s way,” President Nelson said. “We have made the decision to retire ‘home teaching’ and ‘visiting teaching’ as we have known them. Instead, we will implement a newer, holier approach to caring and ministering to others. We will refer to these efforts simply as ‘ministering.’”

"As Latter-day Saints, we have become accustomed to thinking of ‘church’ as something that happens in our meetinghouses, supported by what happens at home. We need an adjustment to this pattern. It is time for home-centered church, supported by what takes place inside our branch, ward, and stake buildings."

He then turned the time over to Elder Cook, who announced changes to the Sunday meeting schedule to help support a more home-centered church. These changes included shortening sacrament meeting to 60-minutes followed by a 50-minute class that will alternate each week.

3. When an Olympian spoke during the priesthood session.

In 1985, Peter Vidmar, an Olympic Gold Medalist, addressed the brethren. This address was one of only a few instances that anyone outside of the general Church leadership spoke at general conference. Brother Vidmar spoke on keeping the standards of the Church and how a little extra effort can make all the difference in the end.

4. When President Benson had someone else deliver his talk.

5. When David Archuleta appeared in the MTC choir.

Though only a brief appearance towards the end of the song, David Archuleta made a cameo during the April 2012 general conference in a heartfelt rendition of "Praise to the Man."

This stunned reaction mirrored many faces across the world when President Monson announced that young men could serve missions at 18 and young women at 19. This opened many doors for those anxious to go but who had previously had to wait until the previous ages of 19 and 21 respectively. The announcement was made during the October 2012 conference.

7. When a talk was given in Cantonese.

Elder Chi Hong (Sam) Wong of the Seventy made history when he delivered his conference talk in Cantonese during the October 2014 conference. It was the first time a conference talk was spoken in a language other than English. Those watching the broadcast of the session had a translator; those in the Conference Center had subtitles.

Forgoing the typical post-session handshake and pat on the back, Elder L. Tom Perry made all of us smile when he gave Elder Bednar some friendly knuckles in April 2014 general conference.

9. When the World Series was leaked through the tabernacle speakers instead of conference.

When radio and television were developing technologies, small hiccups were not uncommon. The most notable general conference tech hiccup occurred when men attending the October 1930 general priesthood session stopped hearing President Heber J. Grant’s voice coming through the Tabernacle sound system and instead heard a play-by-play of the World Series!

The baseball broadcast went on for eight minutes as Sylvester Q. Cannon, the presiding bishop of the Church, raced to the Union Pacific Building—home to KSL Broadcasting at the time—to solve the problem. Apparently, someone at KSL had accidentally flipped the wrong switch, causing all of the confusion.

10. When President Hinckley challenged Elder Nelson to a duel.

During his October 1997 conference address, Elder Russell M. Nelson praised President Hinckley for his exemplary life and spiritual example. Soon afterward, President Hinckley, with the good humor we all grew to love, stood at the pulpit and quipped, “I thought we were conducting general conference. It's turned out to be a funeral.” He then caused the entire assembly to erupt into laughter when he added, completely straight-faced, that Elder Nelson had “taken extreme liberty. I challenge him to a duel down in the basement of the Tabernacle right after this meeting.” When President Hinckley sat down, President Thomas S. Monson stood to speak and offered to back up the prophet with President James E. Faust.

Fortunately for Elder Nelson, the duel was canceled two talks later when President Hinckley stood and said, “Brother Nelson, I’ve repented. Thanks very much for your kind words. We’ll postpone the duel.”

11. When President Monson wiggled his ears.

Attendees of the April 2008 priesthood session laughed along with President Monson when he told the story of the boy he wiggled his ears for in a stake conference. Imagine their surprise when he demonstrated it himself!

12. When that guy photobombed the closing footage of conference.

If you were watching conference via satellite broadcast in 2011, you probably remember this young man who stood up directly in front of the camera, turned, and gave a huge grin during some of the last footage of the April session. Talk about a photo opportunity!

Another funny President Hinckley moment occurred right after Elder Henry B. Eyring was sustained as a counselor in the First Presidency. As President Eyring took his new seat at the front of the Conference Center, President Hinckley walked from the pulpit and lovingly "knighted" him by tapping him on the head with his cane.