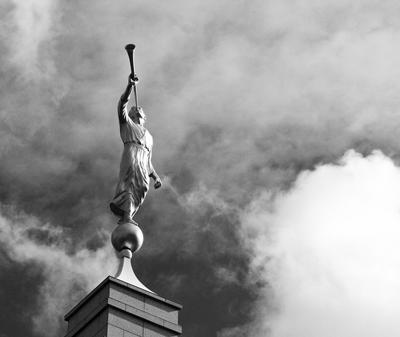 MR says: How many of these events did you know about? Though not always highlighted in classes or our culture, these events shaped the Church as we know it today.

Susan Easton Black, Mary Jane Woodger and Casey Paul Griffiths, three members of the Department of Church History and Doctrine at BYU, have teamed up to write "The 100 Most Important Events in Latter-day Saint History." The book is still in the process of being published and will likely be released in 2016.

The volume features a collection of 100 short essays introducing readers to the basic, foundational events of The Church of Jesus Christ of Latter-day Saints. It includes major events such as Joseph Smith's First Vision, the coming forth of the Book of Mormon, and the Saints' arrival in the Salt Lake Valley, as well as less prominent events like David O. McKay's worldwide tour, the impact of the 1964-65 World's Fair on missionary work, the publication of the LDS edition of the scriptures, and the 1995 release of The Family: A Proclamation to the World.

These lesser known but important events are taken from the authors' list. The summaries are written by or summarized from the writings of Griffiths and Woodger.

In a flurry of activity during the final days of his life, Brigham Young launched an ambitious effort during the summer of 1877 to effectively reorganize the basic structure of the LDS Church. A critical epistle issued during this time served as a forerunner to today’s church handbooks and created the most extensive reordering of the LDS Church since the Doctrine and Covenants was published. The most important change during this time was that members were instructed to worship in geographically-oriented units with a priesthood leader assigned to look after their welfare. (Prior to this time, meetings were not geographical.) During the reorganization, LDS Church leadership formed 140 new units, more than doubling the number of wards in the church, and organized or reorganized hundreds of new bishoprics. Each was directed to organize a Mutual Improvement Association for Young Men and Women, and to enroll their members in Sunday School, effectively creating the ward and branch structure common today in The Church of Jesus Christ of Latter-day Saints.

Joseph F. Smith's vision of the redemption of the dead, 1918

In the months leading up to general conference in October 1918, President Joseph F. Smith had been very ill. His son and other family members had recently passed away. He may have been pondering his own death.

These and other events may have led him to be thinking about the spirit world and thus led to his vision of the redemption of the dead, which he dictated to his son

Joseph Fielding Smith before it was presented to church leaders a few weeks later.

The vision of the redemption of the dead has become central to the theology of the LDS Church. It confirms and expands earlier prophetic insights concerning work for the dead and introduces doctrinal truths that were unknown before October 1918 and not fully instituted until 1976.

Learn more about early Church history and the life of the Prophet Joseph through the Joseph Smith Papers project, an incredible project that gives readers access to details, records, and manuscripts surrounding Joseph Smith's life that have never been published before. You can check out volume one, volume two, and volume three of this series at deseretbook.com.