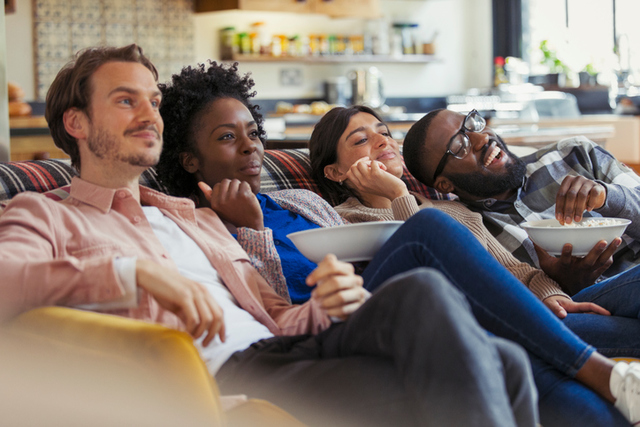 While sifting through different movie options listed on Amazon Prime, most people don’t realize that there are many hidden treasures that usually will not pop up. Here is a list of 15 movies that you can currently watch for free on Amazon Prime that are perfect for Latter-day Saints. 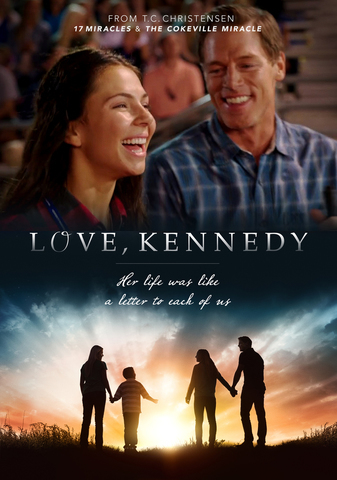 Kennedy Hansen is funny, loving, and seems to be a typical child—until she inexplicably begins to fall. It takes years for a diagnosis...juvenile Batten disease, an extremely rare, terrible, and terminal prognosis. There is no cure for Batten disease and after living only sixteen years, Kennedy leaves behind a great legacy of love and friendship. But her story doesn't end at her death—in fact, that's when the miracles really begin. Also available for purchase at deseretbook.com.

► You'll also like: How a Visit from a Deceased Friend Led One Family to the Gospel

As part of the Willie Handcart Company, Levi Savage (Jasen Wade) feared that leaving late in the season would lead to despair and death. What he came to find out is that for every tragedy, there is a multitude of miracles.

Based on unbelievable actual events, and brought to you by filmmaker T.C. Christensen (Praise to the Man, The Work and the Glory), 17 Miracles will open your eyes to the stories of the Latter-day Saint Pioneers as you have never seen them before. Something extraordinary is about to happen. Also available for purchase at deseretbook.com. 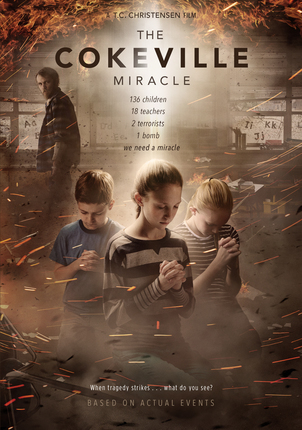 On May 16, 1986, in the small, ranching community of Cokeville, Wyoming, David and Doris Young took an elementary school hostage for several hours before detonating a bomb inside a classroom that held every teacher and student in the school. In the wake of the madness, Ron Hartley, whose children were inside the classroom, must fight his skepticism and unbelief as he hears eyewitness accounts from the students about miraculous, heavenly intervention during the crisis. When tragedy strikes ... what do you see? Also available for purchase at deseretbook.com.

► You'll also like: The Astonishing True Stories Behind The Cokeville Miracle Movie

Joseph Smith: The Prophet of the Restoration (NR)

While Joseph Smith was restoring the gospel of Jesus Christ, he was faced with trial after trial. This movie is great for acquainting viewers with the struggles that our beloved prophet suffered through to reestablish the gospel we cherish today.

The Saratov Approach is the extraordinary, untold story of Elders Travis Tuttle and Andrew Propst and their week-long abduction in Saratov, Russia. On what seemed like any other day during their two-year LDS missions, Elders Travis Tuttle and Andrew Propst are approached by Nikolai to meet a friend. But then the missionaries experience the unimaginable — kidnapped, beaten, and held for ransom for nearly a week — on the other side of the world in Saratov, Russia. While their family, friends and the world pray for their safe return, Tuttle and Propst are tested physically, emotionally and — most of all — spiritually. Also available for purchase at deseretbook.com. 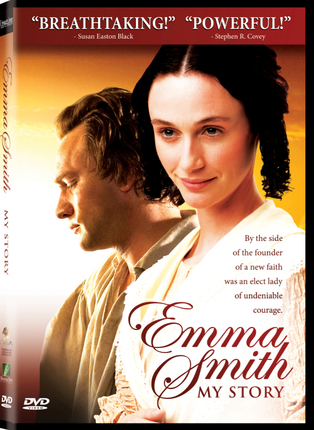 Her legacy is forever linked to that of her husband's, the Prophet Joseph Smith. But who really was Emma Hale Smith? Many years after the death of Joseph, Emma recounts to her daughter her experiences relating to the birth of The Church of Jesus Christ of Latter-day Saints, from magnificent revelations to excruciating persecutions. Discover the remarkable life of an elect lady. Also available for purchase at deseretbook.com.

In-mid December 1944, while Hitler's Army blitzkriegs through the Ardennes Forest in Belgium. American sharpshooter Corporal Nathan Greer, known as Deacon, finds himself held captive with over one hundred other American Soldiers in a snow covered-field.

As panic and confusion ensue, the German soldiers open fire on the American prisoners in the historical event now known as the Malmedy Massacre. Greer, his friend Gordon Gunderson, and a handful of others escape the massacre by hiding in the nearby woods.

The small band of soldiers come across a stranded British intelligence officer with valuable information to be delivered to the Allied forces, further upping the stakes of their already dangerous situation. With few weapons, no food and strained camaraderie, this tiny band must take on the unforgiving winter to fight their way back to Allied occupied territory. Also available for purchase at deseretbook.com.

Cut off behind enemy lines after parachuting into Southern France during Operation Dragoon, their commitment to the Airborne Creed urges them forward—and proves that a few good men can change a war. Also available for purchase at deseretbook.com.

► You'll also like: 6 Stories of Faith from Soldiers on the Front Lines and Their Families 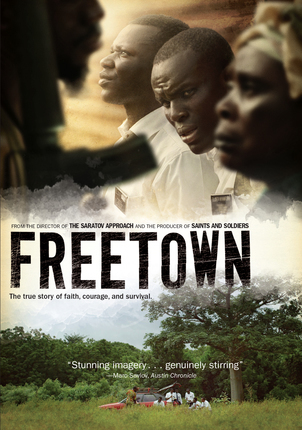 Caught in the middle of a brutal civil war, six Liberian missionaries in Monrovia flee the widespread violence of their native country. Their destination: Freetown, Sierra Leone. With the help of local Church leader Phillip Abubakar (Henry Adofo), the missionaries make the difficult journey only to have their troubles compounded by a rebel fighter bent on killing one of their own. Based on true events, Freetown is a thrilling and inspiring story of hope and survival. Also available for purchase at deseretbook.com.

► You'll also like: The Harrowing Story of a Convert Missionary Trapped in Civil War

A troubled young rugby player is given the choice between jail or playing for a rival team coached by a man known for building not only championship teams, but championship boys. Based on a true story, Forever Strong offers stand up and cheer sports drama combined with the consequences of a strong ethical code to achieve victory on and off the field. Also available for purchase at deseretbook.com.

What father ever thinks his little girl is ready to get married? Ned Stevens is convinced that his future son-in-law is too perfect. Athletic, good-looking, musical, spiritual . . . nobody could be that good. Ned is sure there's something fishy about this boy his daughter seems so crazy about. He just has to find out what it is before it's too late. But how far will he go to prove his point, particularly when he keeps hearing the voice of his deceased wife questioning his every move? This lighthearted romp by best-selling author Dean Hughes is the perfect blend of romance, comedy, poignancy, and just plain fun!

► You'll also like: Award-Winning Author Dean Hughes Shares the Secrets to His Success 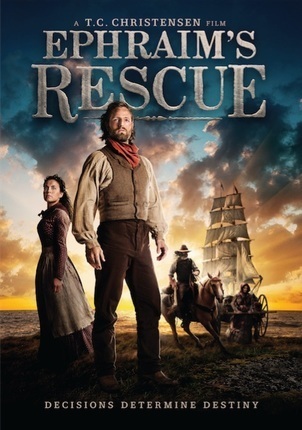 From T.C. Christensen, director of the sensational pioneer film, 17 Miracles, comes the heroic true story of a simple man who was called to do the work of angels. Ephraim's Rescue relates the story of Ephraim Hanks: a rescuer of the Martin Handcart company.

Follow Ephraim as his adventures lead him to join the Mormon Church and to ultimately lead one of the most heroic rescues in American history. With a unique desire to help and strengthen others, Ephraim learns that each choice we make can prepare us for what lies ahead. He discovers, through it all, that decisions determine destiny. Also available for purchase at deseretbook.com. 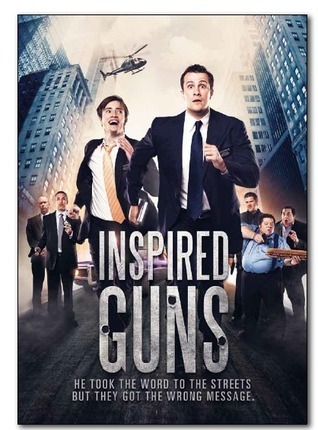 The last thing Elder Fisher expects when he and his brand-new companion, Elder Johnson, hit the city streets is a couple of seemingly golden prospects. But dimwitted brothers Roger and Larry, low-level Mafioso, think the two Mormon missionaries who approach them have been sent by the "Boss" to deliver their next assignment. So the brothers are willing to listen to anything the young men in dark suits have to say—including a message of salvation—even if Elder Johnson is the most overconfident and underprepared missionary to ever attempt to preach the word of God. Soon the witless brothers are searching through the Book of Mormon in a quest to find a hidden message. But as the missionaries and Roger and Larry continue to meet for discussions, both the mafia and the FBI have their sights set on Elders Fisher and Johnson. Now the mismatched elders must learn to rely on each other to survive their likely lethal case of mistaken identity. A hilarious action-packed movie the whole family will enjoy. Also available for purchase at deseretbook.com. 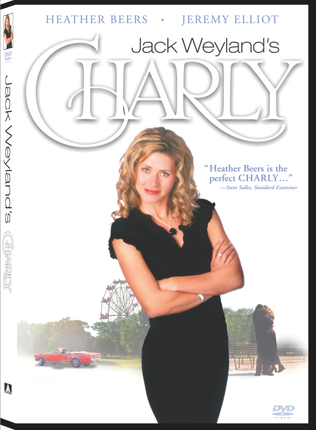 Sam Roberts thinks he has all the answers: the purpose of life, the meaning of love, the plan for a perfect future. Until Charly walks into his life. As different as Salt Lake City and New York City, Sam and Charly are thrown together by circumstance and repelled by differences. He's scheduled and idealistic. She's spontaneous and cynical. He's guarded and practical. She's open and mischevious. He's a Mormon. She isn't. Differences spark interest, though, as Charly finds depth in Sam's idealism and Sam seeks the vibrance of Charly's joie de vivre. But all is not smooth in the Rockies, as their relationship accelerates - cultural differences, family issues, former loves and life-altering challenges threaten to shake things up. Also available for purchase at deseretbook.com. 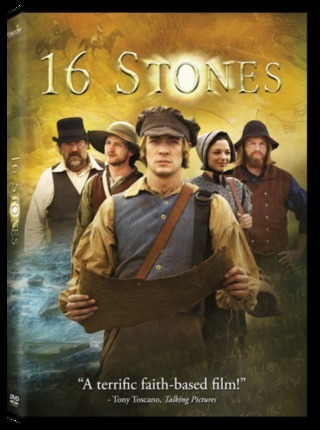 The exciting journey of 16 Stones comes to life in a time fraught with persecution. In 1830s Missouri, James vows to protect the people of his village after they are attacked. He embarks on a quest to find the 16 Jaredite stones, but it is a trail filled with danger and challenges. With the help of two friends, they find peace in the face of turmoil and faith in the face of doubt. Also available for purchase at deseretbook.com. 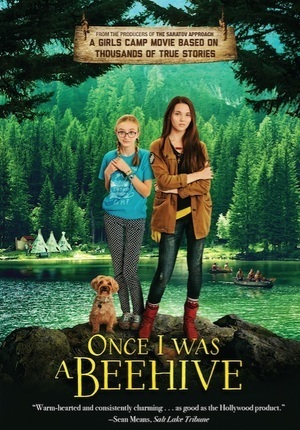 Once I Was a Beehive (PG)

Lane Speer is a 16 year old girl who spends her family vacations camping in the mountains. She takes the memories for granted until she loses her father to an unexpected bout with cancer. Only a year later, as Lane is still reeling from her father's death, her mother remarries a guy that Lane hardly knows. Worst of all, he is a Mormon. To top it off, while they are on their honeymoon, they arrange to have her stay with her Mormon step-aunt who takes her away to a bible-themed girls camp with a bunch of young Mormon girls. Confronted with memories of camping with her family, she tries to find peace with her new surroundings and deal with the death of her father. Also available for purchase at deseretbook.com.