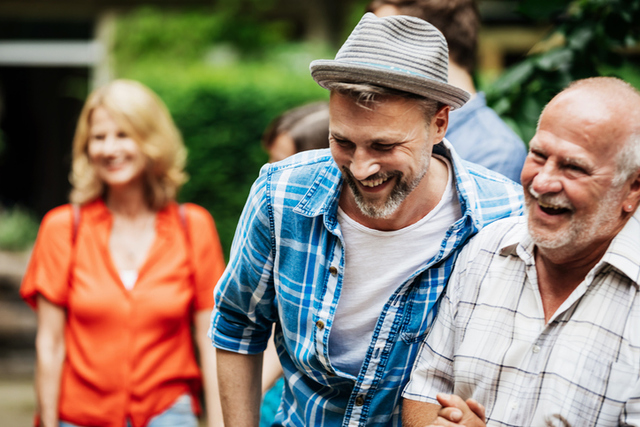 We’ve all been there. You’re at a Little League game with your neighbors, your kids have friends over at your house, or you’re sitting unsuspectingly in Sunday School.

And then it happens.

Your husband just has to open his mouth and unleash his particular brand of humor on the room.

Dads are the greatest, but when it comes to jokes, let’s just say there’s room for improvement. And when it comes to lame humor, you could make the argument that, since most of our dads aren’t telling dirty jokes, Latter-day Saint families have to endure a set of “dad jokes” in a class above the rest. But be honest—you secretly love the dad jokes, right? (I’m a dad, so please say yes.)

Maybe it’s because they come from a place of good intentions, or because a dad embarrassing his kids is a right of passage. Or maybe it’s because so many of us will go on to be dads ourselves, so, deep down, we get it.

This Father’s Day, instead of rolling your eyes at your dad’s latest silly riddle or cringe-worthy pun, let’s celebrate dads and all their cheesy humor. To get you started, here are 17 dad jokes perfect to tell this weekend!

1. Did you hear about the family that left all their possessions behind to dwell in the wilderness?

It was in tents. (Intense/in tents. Get it?)

2. What did the ocean say to the Brother of Jared?

Nothing; it just waved.

3. In Sunday School, they asked if I was listening.

What a strange way to start a lesson.

The Nephites ate all their fancy meals on gold plates.

5. An LDS weasel goes into a restaurant for dinner and the waiter says, “I’ve never served someone from your church before. Would you like to start with a beer?" “I don’t drink alcohol,” comes the reply. The waiter responds, “What can I get for you then?”

6. The Bishop asked if we’d like to start studying the New Testament on Saturdays at the church.

7. Why did Brigham Young wear a beard?

At first he didn’t like it, but then it grew on him.

8. After scripture study, my daughter asked, “Can I have a bookmark?”

I was devastated. Nine years old and she doesn’t even know my name is Bryan.

9. How did Jonah feel when he was swallowed by the whale?

Down in the mouth.

Dad: No thanks, I’m already wearing one.

11. What do you call it when Batman skips church?

12. Who was the smartest man in the Bible?

Abraham. He knew a Lot.

13. Why is it risky to play cards with Primary children?

Because they never fold their hands.

14. Why do melons go to the temple to get married?

15. Why did the leopard hide from Noah?

Because he didn’t want to be spotted.

16. Did all of the creatures on the ark come in pairs?

No. The worms came in apples.

17. Dad: Did you know I’m named after Captain Moroni?

Dad: Yes, but I was named after Captain Moroni!

Aside from being a latter-day dad who loves to hear his family groan in pain after one of his jokes, Preston Lee is also a full-time blogger and entrepreneur at Millo where he helps people find clients and start freelancing or grow their own creative business.