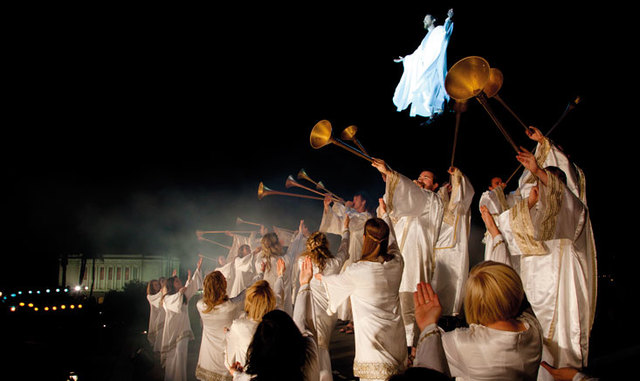 “I think one of the hardest things about playing the role are the expectations that everyone has of you,” Maxson said. “People are very free with how they feel about the Savior and the faith. They project all that onto you when you’re on stage. It’s difficult to shoulder.”

For two guys who consider acting an avocation, Tyler Maxson and Trevor Orme have played one of the most challenging roles around.

They have portrayed Jesus Christ in the 65-minute, world-renowned “Mesa Arizona Easter Pageant Jesus the Christ” at the Mormon temple, which ended a 10-day run on Friday.

Orme, a 29-year-old lawyer in Mesa, just completed his third year as Christ.

Maxson, a 37-year-old psychologist in Mesa, played Jesus for nine years until he became an assistant director of the spectacle and limited his appearance as Jesus to just the day its Spanish version ran.

What has playing Jesus done to them in their personal lives?

“It makes you want to be better and do more good,” Maxson said. “In my professional life as a psychologist, I feel like it’s made me want to care more and do more for my patients. With my family, it’s really been a gift. I can’t emphasize that enough.”

Said Orme: “In general, throughout these three years, I’ve come to realize the love Christ has for us. When I put on that wig and that costume, I’m still me but I’m not me anymore. I want to feel, act and be exactly who he would be.”

Read the rest of this story at eastvalleytribune.com