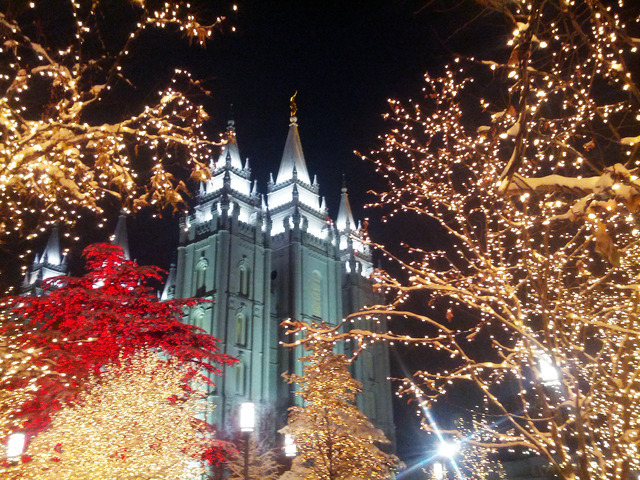 20 Things You Didn't Know About Temple Square at Christmastime

This story originally ran on LDS Living in December 2017.

Visiting Temple Square at Christmas time is on a lot of people's bucket lists—and not just for Latter-day Saints. The lights display on the Salt Lake Temple's grounds makes December a favorite time for visitors.

One couple who are not members of the Church come every year all the way from North Carolina to see the Christmas displays, "Because no one celebrates Christmas like the Mormons do."

And while Temple Square always has surprises in store no matter when you go, at this time of year, there's something extra magical about this wonder of the Latter-day Saint world when it's adorned with beautiful nativities and decorated with glowing lights on every tree, bush, and building. It's a magic that brings peace. As Elder Richard L. Evans said at the first lighting ceremony in 1965, "We thought that Temple Square should be a place where men could come and reflect on the real meaning of Christmas."

To make this picturesque scene isn't easy—check out these 20 unexpected things about Temple Square at Christmastime.

The South Gateway to Temple Square becomes a curtain of light with the welcoming words, "Good Will Toward Men" on December 18, 1965. Photo from Deseret News.

1. The lights on Temple Square almost didn't happen. In the fall of 1965, when Deseret News publisher E. Earl Hawkes proposed the idea to President David O. McKay, the head gardener at Temple Square was worried that heat from the lights would harm the trees. After much debate, President McKay decided to go ahead with the project (some say at the urging of his wife, who thought the Church should do more to share their beliefs at Christmas).