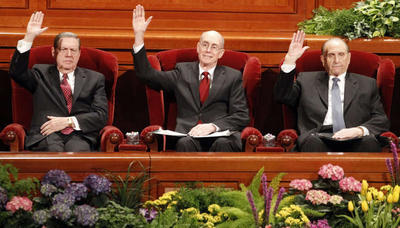 MR says: From Harold B. Lee to Gordon B. Hinckley and Jeffrey R. Holland, all men who serve in the Quorum of the Twelve Apostles have an incredible story to share about what it was like being called as an Apostle.

The recent deaths of Elder L. Tom Perry, President Boyd K. Packer and Elder Richard G. Scott created three vacancies in the Quorum of the Twelve Apostles of The Church of Jesus Christ of Latter-day Saints.

With the possibility that these positions could be filled during the 185th Semiannual General Conference, DeseretNews.com compiled stories from current and former church leaders about their calls to the quorum.

Calling Multiple Apostles: What You Need to Know

The Story Behind When a 16th Apostle Was Called

In 1980, the First Presidency called Elder Jeffrey R. Holland into a meeting where he was told he would succeed Dallin H. Oaks as president of Brigham Young University.

According to an August 1995 Liahona article, he replied, "President Kimball, you've got to be joking!"

Later, on June 23, 1994, Elder Holland met with President Howard W. Hunter and was called to serve in the Quorum of the Twelve Apostles.

"In a rapid sequence of events that Thursday morning, President Hunter interviewed me at length, extended to me my call, formally introduced me to the First Presidency and the Twelve gathered in their temple meeting, gave me my apostolic charge and outline of duties, ordained me an apostle, set me apart as a member of the Quorum of the Twelve, added a magnificent and beautiful personal blessing of considerable length, then went on to conduct the sacred business of that first of my temple meetings, lasting another two or three hours!" Elder Holland said during his first general conference talk as a member of the Quorum of the Twelve Apostles, "Miracles of the Restoration."

On the morning of general conference on April 5, 1941, President Harold B. Lee had an impression.

“Before I arose from my bed, I received a definite impression that I would be named a member of the Quorum of the Twelve,” he recalled in his biography, "Harold B. Lee: Prophet and Seer," by L. Brent Goates.

That night, he attended the priesthood session, and President J. Reuben Clark asked President Lee to come to the stand. While he was on the stand, Elder Joseph Anderson instructed him to go to the General Authorities' room, where President Grant was waiting for him, according to President Lee's biography.