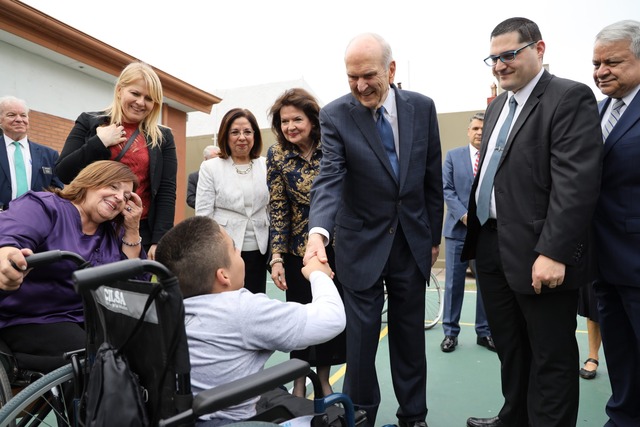 Elder Neil L. Andersen was a newly sustained member of the First Quorum of the Seventy in the spring of 1993 when he traveled with then-Elder Russell M. Nelson to Pocatello, Idaho, where they were assigned to call a new stake president. Approximately 30 brethren were interviewed on Saturday morning. Later that evening, Elder Andersen watched as Elder Nelson remembered the names of each of the men they had interviewed earlier in the day.

“As we met them and their families, he referred to them by name,” Elder Andersen recalls. “I personally could remember only one or two of their names. I asked him later as we returned to Salt Lake City how was it that he could remember the names of those 30 we interviewed and connect them all with their faces.

“He smiled at my question and answered, ‘Neil, I remember their names because I want to know them. There is no special technique. When you love them, you remember them.’”

Elder Andersen’s was one of many tributes to President Nelson for his 97th birthday and one of three which highlighted his ability to remember names. Sister Michelle D. Craig, first counselor in the Young Women general presidency, remembered how it made her feel that President Nelson remembered her name in one of their first meetings.

“He stood in the doorway of the room, shook my hand when I entered and said, ‘Hello, Michelle.’ I was humbled and amazed that he knew my name. When the meeting started, he asked each member of our presidency about our husbands, by name. This seemingly small interaction has made a lasting impression on my heart. People are a priority to our prophet,” Sister Craig said.

President Henry B. Eyring said that he has learned three life-changing lessons from President Nelson and one is that “his love for people leads him to learn and remember their names.”

“He remembers that he met them and even the names of their spouse and children! As he speaks their names, the sound in his voice seems to convey love.”

Read more of what Church leaders have learned from President Nelson here.