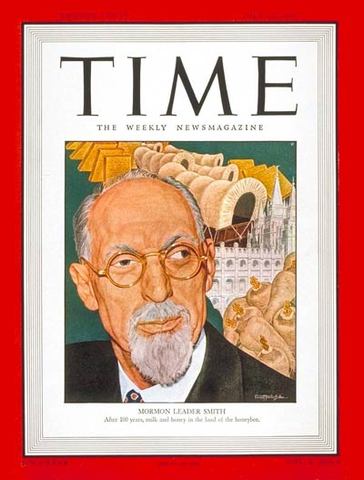 Marking another centennial mark in Church history, President George Albert Smith was featured on the cover of the July 21, 1947, cover of Time magazine.

The issue celebrated the 100-year mark of the Latter-day Saint pioneers' arrival in the Salt Lake Valley and covered the Church's history from the time Joseph Smith received the Golden Plates to President George Albert Smith's time as the prophet.

Though referring to Latter-day Saint religious artifacts like the Urim and Thummim as "magic" and saying the Church "sprang from the mind" of Joseph Smith, the article nodded to the Latter-day Saint pioneers' hard work and innovation, noting, "Their desert has indeed blossomed like the rose" due to the pioneers' sacrifices.

When discussing George Albert Smith, the article highlighted both his character and his role as the leader of the Church, noting he was a "polite, lively, deeply religious old man with an awareness of history and consummate faith in the truth," and, "Somehow, in sum, he is impressive. In his quiet and earnest way Smith is a great salesman and public-relations man and one who serves the needs of the church well in 1947. People who watch him in his office—slyly popping bonbons into his mouth while he works—know that they are dealing with a force."