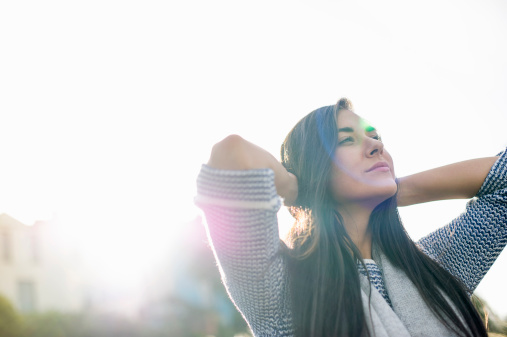 "Wow, you wear a lot of layers," is probably a strange thing for a doctor to say, but when you're an active, endowed member of the Church, it's true.

It was September 2014. I was a newlywed with a badly scratched cornea who was also working on closing the gap between what I thought I knew about temple garments and what I actually knew about them.

I felt acutely uncomfortable as the campus doctor had to lift four layers of clothing so he could hear my heartbeat with a stethoscope.

Trying not to blink or breathe or do anything that would agitate what felt like an eyeball covered in glass, I kept thinking about what the doctor said because a) it was a weird thing to say to someone who was in a lot of pain and b) it helped me contemplate what my garments meant to me.

It would seem a little bizarre to someone who didn't know how sacred the temple garment is or what it symbolizes to see someone wearing them when they were already swathed in so many layers. Granted, it was late September in northern Utah so the weather was already very chilly, but it must have seemed a little unnecessary to be wearing the temple garment in addition to a cardigan, shirt, and tank top.

But it was necessary. And the temple garment is so much more than an extra layer of clothing.

When I first received the temple garment, I didn't know very much about it. I wasn't really sure what questions I should have about it or whether I could even discuss it outside of the temple. Besides, I thought I knew all there was to know about it, which of course wasn't true.

I took the temple preparation class in Sunday School before receiving my endowment, so I had a general knowledge of what the temple garment was and what it meant. But I never made the connection of what the temple garment meant to me personally. With all the wedding details, the moving details, the family details, and the overall twitterpation of being sealed to my best friend for all eternity, I didn't feel like I had a lot of time to process anything that was happening to me the few weeks leading up to receiving my endowment. But when I was laying on the examination table while the university doctor poured yellow dye onto my eye to find where the scratches on my cornea were, I realized how much I had learned about my garments since becoming endowed and what I wish I had known about them before I received them.

The temple garment is a shield from temptation.

Before I was endowed, I had heard stories of how the temple garment was sometimes credited with protecting people physically. One of my Sunday School teachers growing up told our class that while he was working as an auto mechanic, something went wrong with the car he was working on and hot fluid burned his shoulder, but not the part where his garments were.

The temple garment physically represents the covenants we make in the temple and therefore is a "protection against temptation and evil," according to the Church's Handbook 2: Administering the Church.

In his book The Holy Temple, President Boyd K. Packer said, "The garment represents sacred covenants. It fosters modesty and becomes a shield and protection to the wearer."

With this kind of constant spiritual protection, it's no surprise the temple garment is sometimes referred to as "armor," as President Russell M. Nelson said in his April 2001 general conference address "Personal Preparation for Temple Blessings":

"Wearing the temple garment has deep symbolic significance. It represents a continuing commitment. Just as the Savior exemplified the need to endure to the end, we wear the garment faithfully as part of the enduring armor of God. Thus we demonstrate our faith in Him and in His eternal covenants with us."

Elder Carlos E. Asay, an emeritus member of the First Quorum of the Seventy, also expanded on the temple garment's ability to protect us spiritually in an article published in the August 1997 Ensign "The Temple Garment: An Outward Expression of an Inward Commitment.” Speaking of the armor of God the Apostle Paul refers to in Ephesians 6, Elder Asay relates how garments can also be considered spiritual armor and how they protect us from temptation:

"The heavy armor worn by soldiers of a former day, including helmets, shields, and breastplates, determined the outcome of some battles. However, the real battles of life in our modern day will be won by those who are clad in a spiritual armor—an armor consisting of faith in God, faith in self, faith in one’s cause, and faith in one’s leaders. The piece of armor called the temple garment not only provides the comfort and warmth of a cloth covering, it also strengthens the wearer to resist temptation, fend off evil influences, and stand firmly for the right."

As Latter-day Saints, we have the incredible blessing of spiritual protection from the temptations and the influence of the adversary as we wear the temple garment correctly and treat it with respect.

How we wear the temple garment is an expression of our inward commitment to follow the Savior.

Before I received my endowment, I understood that the temple garment was a special representation of my covenants with Heavenly Father and I shouldn't wear it inappropriately. However, I didn't fully comprehend how the way I wore the temple garment could be a personal expression of my commitment to follow the Savior.

Wearing the temple garment is a physical, constant reminder of our sacred, vital covenants.

According to the Church's Handbook 2: Administering the Church, members "should not adjust the garment or wear it contrary to instructions in order to accommodate different styles of clothing. Nor should they alter the garment from its authorized design. When two-piece garments are used, both pieces should always be worn."

Though the temple garment is not seen by others and is worn underneath regular clothing, it is a physical representation of our willingness to live the gospel and follow our Savior that is important to our salvation.

“No man [can] be saved except his garments are washed white; yea, his garments must be purified until they are cleansed from all stain, through the blood of him of whom it has been spoken by our fathers, who should come to redeem his people from their sins. . . .

“Have ye walked, keeping yourselves blameless before God? Could ye say, if ye were called to die at this time, within yourselves, that ye have been sufficiently humble? That your garments have been cleansed and made white through the blood of Christ, who will come to redeem his people from their sins?” (Alma 5:21, 27).

Elder Asay illustrates how important it can be to treat the temple garment with respect and wear it appropriately by sharing an exchange President Harold B. Lee once had with President James E. Faust:

"A few years ago, in a seminar for new temple presidents and matrons, Elder James E. Faust, then of the Quorum of the Twelve Apostles, told about his being called to serve as a General Authority. He was asked only one question by President Harold B. Lee: ‘Do you wear the garments properly?’ to which he answered in the affirmative. He then asked if President Lee wasn’t going to ask him about his worthiness. President Lee replied that he didn’t need to, for he had learned from experience that how one wears the garment is the expression of how the individual feels about the Church and everything that relates to it. It is a measure of one’s worthiness and devotion to the gospel" (Elder Carlos E. Asay, August 1997 Ensign "The Temple Garment: “An Outward Expression of an Inward Commitment”).

Garments are a piece of the temple we can have with us always.

Even before I received my endowment, I always felt a little sad as I drove away from the temple after performing baptisms for the dead. I loved the feeling I received from being in the Lord's holy house and performing the work of salvation for others.

What I wish I knew before I received my endowment was that I could have a little bit of the temple with me always when I wore the temple garment faithfully.

The work that we do for the dead does not end when we leave the temple. It's important for us to live up to temple covenants and wear the temple garment faithfully for the work of salvation we perform for others as well as ourselves.

As I've come to learn more about this, the temple garment has become an especially sweet reminder to me of the importance of the work I am doing for my deceased family members who did not have the opportunity to receive the blessing of the temple in this life. It reminds me of the enormity of trust my Heavenly Father gives to me by allowing me to perform the work of salvation for myself and others. It a reminder of the gravity of the statement Prophet Joseph Smith made to Church members, "For we without them cannot be made perfect; neither can they without us be made perfect" (Doctrine and Covenants 128:18).

I especially appreciated what Elder Asay had to say about this aspect of the temple garment:

"I like to think of the garment as the Lord’s way of letting us take part of the temple with us when we leave. It is true that we carry from the Lord’s house inspired teachings and sacred covenants written in our minds and hearts. However, the one tangible remembrance we carry with us back into the world is the garment. And though we cannot always be in the temple, a part of it can always be with us to bless our lives" Elder Carlos E. Asay, August 1997 Ensign "The Temple Garment: “An Outward Expression of an Inward Commitment”).

Though there are many things about the temple garment that can't be discussed casually or outside the temple because these topics are so sacred, I know these few aspects of the temple garment's sacred symbolism have helped increase my understanding of it.

And these aspects are what I wish I knew before I received my temple garment.