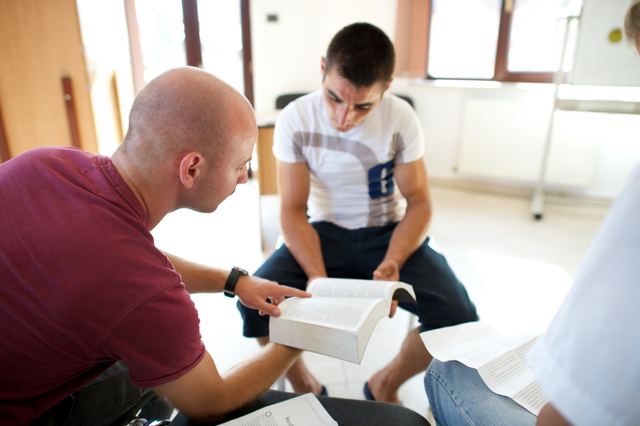 byClayton M. Christensen, adapted from "The Power of Everyday Missionaries" | May 26, 2018

How can we better share our religion without making the conversation feel forced? What should we be sharing with others? Here are three powerful ideas to help you be a better everyday missionary:

1. Use Mormon words in everyday conversation.

A friend gave me the first idea: to use religious words and “Mormon” words in my day-to-day conversations, such as these:

“I am so tired. I am the scoutmaster in our troop sponsored by the LDS Church, and I took the boys on an overnight camping trip last night.”

“I go to the Mormon Church in Belmont, and a friend who gave the sermon last Sunday said something that is exactly how we need to start this presentation.”

I respond, “I am, and it is a wonderful church. Why do you ask?” I have found it very helpful to ask, “Why do you ask?” rather than telling them information that they do not care about. This way, we can have a conversation about what they’re interested in. Most of the time their interest is transitory, and that is fine. But on occasion the person will show even more interest, which then gives me the chance to invite them to have a deeper conversation.

It is important to view normal conversations with people in probabilistic terms. If 5 percent of people have some latent interest in the LDS Church, and I open up a conversational door about the church with twenty people, one of them will express interest—and I can’t judge who it will be. If we open a door to a hundred people, five of them will be interested. This is why it is so important to make the gospel a part of our conversations in an open, matter-of-fact way.

When someone says, “Tell me about the Mormon Church,” we often give a doctrinal response—eternal families, modern prophets and scriptures, and so on. This makes sense to us because doctrine is the reason why we are in our church instead of in another. Doctrine over time becomes very important to converts, too. But it typically is not the initial reason for their interest.

In 1975, the Church did an extensive survey of new converts to determine what it was about the Church that had initially interested them (see L.F. Anderson, “What Are Nonmembers Interested In?” Ensign, October 1977). These were the results, in order of frequency of mention:

1. The feeling of closeness to God that they wanted to experience because they could see this closeness in the lives of Mormons they knew.

2. Happiness and a sense of peace, which they wanted and which they saw in the lives of Mormons they knew.

3. They wanted a better sense of purposefulness and direction in their lives. They tended to see this in Mormons they knew.

Only 9 percent of new converts said that doctrine was the main thing that attracted them to the Church. For all who are baptized and remain active, doctrine becomes much of the glue that cements them in the Church. But it typically isn’t what they were looking for at the outset.

What this means is that when someone gives us a chance to tell them about us, as a general rule we ought not to tell them what we like about our own church—about the doctrine that we love so much. Rather, when I respond with a question like “It’s a great church. Why do you ask?” if they don’t have anything specific in mind, I then answer with something relating to the three reasons noted above. If they have something more specific in mind, then I can answer specifically.

3. Learn how to decouple.

The third habit is one that I use with people I know well. I decouple my invitation to learn about the Church from my relationship with them, using language like this: “Scott, I’m going to ask you a question. But before I ask, we need to agree that our friendship won’t be affected if you decide that this isn’t of interest to you. Okay?” Almost always, they assure me that this is all right. Then I say, “As you know, I’m a member of the LDS Church. For a while I’ve just had a sense that there are a few aspects about the Church that might be interesting to you. If at some point you have an interest, I’d love the chance to talk a bit about these things.”

By couching my invitation in this way, I make it easy for them to say no, and as a consequence it doesn’t strain my relationship with them at all. In fact, whether or not they have an interest, almost always they will thank me for caring enough about them to ask.

“Uncomfortable.” “Intimidating.” That's how many people describe member missionary work. Clayton Christensen admits that he and his wife, Christine, felt that way in the past too. But they also recognized the tremendous blessings associated with the work, and they wanted to learn how to share the gospel in ways that would be natural and rewarding. Their refreshing perspectives are presented in The Power of Everyday Missionaries, which includes inspiring, unusual stories that demonstrate the effectiveness of the ideas.