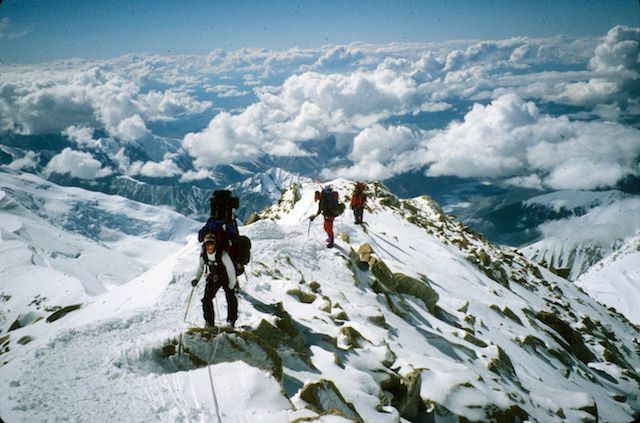 “You either are thriving in your life, or you’re just enduring your life,” Stacy Taniguchi told This Is the Gospel episode producer Sarah Blake this summer.

Now, you might be wondering, “Who is Taniguchi and what gives him the right to say that?” Well, Taniguchi has summited Mount Everest, hiked, camped, and fished with CIA operatives and celebrities, coached Olympians, earned his Ph.D., built a dream home in Alaska, learned Japanese, and summited the tallest mountain peak in North America 17 times. Needless to say, Taniguchi is somewhat of an expert when it comes to living an exhilarating life, and he wants others to do the same.

So how does he do it? Taniguchi, a member of The Church of Jesus Christ of Latter-day Saints, says one way to live an exhilarating life is to create a list of 100 things accomplish. It’s an idea Taniguchi got from a Life article he saw when he was a teenager. He says what struck him about the article was a picture a man holding up his completed list of 100 things, an image that he can still remember vividly today.

Since then, Taniguchi has compiled his list and marked off many accomplishments. But before you think this is just a bucket list, it’s not.

“I know people tend to use the term ‘bucket list,’ but I don’t want them to be thinking about death,” Taniguchi says. “I want them to think about their life as one that can be exhilarating and challenging.”

And during the This Is the Gospel podcast, Taniguchi encouraged listeners to create their own exhilarating list of challenges.

But how do you even go about to creating such an epic list? Here are three tips what Taniguchi suggests for making it happen:

For example, he says that if you value your family, you should never put something on the list that conflicts with that. Instead, Taniguchi suggests finding ways to incorporate family in what you want to accomplish or making sure your family is supportive of the items on your list.

In order to create momentum and spark motivation, Taniguchi suggests adding things that you’ve already accomplished to your 100 list.

“Think back on what you’ve accomplished in your life,” Taniguchi says. “Those things that have made you a better person, things that have helped to make you grow and helped you feel good about who you are and put that on your list.”

3. Once you put something on the list, don’t take it off.

While it might be tempting to look at back on your list and remove a goal or two, Taniguchi suggests keeping everything as it is.

So what is so special about creating this list, especially during a pandemic where opportunities seem to be limited?

“I think we get so caught up in the busyness of life, the obligations of life, the concerns and challenges of life—especially during this pandemic—that we tend to overlook the fact that opportunities are coming at us in a variety of different ways,” Taniguchi says. “I have found in my life that when something was on that list, and I revisit the often, those opportunities come up. . . . The key is you have to be intentional about this. You can’t just wait for these things to just happen to you.”

While Taniguchi admits that the process of accomplishing the things on his list hasn’t always been enjoyable, looking back, he’s seen how his list has changed his life and helped him thrive.

“I’ve actually have come to some satisfaction that the Lord has given all the opportunities and the things that I’ve been able to do in my life, to come to this idea of thriving and trying to give people this sense that there’s no magic potion,” Taniguchi says. “It does require some effort, but it’s not as hard as you think. . . . And I know there are people who really go through some real struggles. But what I hope is that they do have a sense that, ‘I can change it. I can do something about it.’”