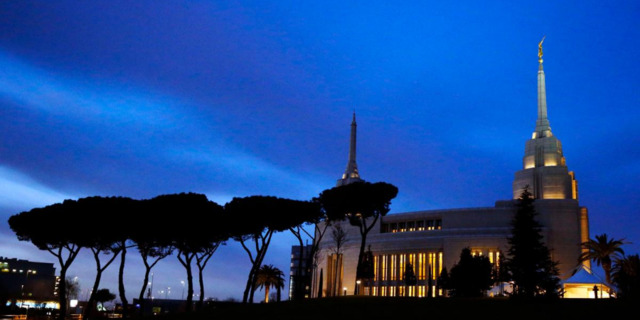 Every Monday morning, I eagerly check Newsroom to see what temples will reopen in the coming week. I feel joy for my fellow Saints around the world as the sealing power is once again available in their country in the first phase of reopening. I marvel as I picture missionaries preparing to serve during a pandemic who have the opportunity to receive their endowment before their departure through temples in the second phase of reopening.

But this Monday morning, August 3, was different—no new temples were announced to enter the first or second phase of reopening, the first time an announcement hasn’t been made in 12 weeks according to Church News. As of August 3, a total of 127 of the 168 operating temples are open with limited operations, and 12 of those temples are performing all living ordinances. And though my Monday morning wasn’t filled with the normal excitement of an announcement that more temples would reopen, I still find reasons to hope. Here are just three.

The Savior’s Care and Concern

Though no new temples were announced to reopen on Monday, the Church did release a powerful video from Elder Dale G. Renlund of the Quorum of the Twelve Apostles that same day. Elder Renlund notes that the COVID-19 situation caused temples to close, resulting in a significant effect on the number of people receiving ordinances and proxy ordinances.

“The fact that we can’t go to the temple doesn’t change the impact that the temple can have on us in our lives,” Elder Renlund says in the video. “We have entered into a covenant that’s been part of an ordinance. And it’s keeping those covenants that will bring the power of godliness in our lives, whether we’re able to physically go to the temple or not.”

I believe Elder Renlund also gave us a powerful insight into the phased reopening of temples. In the video he says, “The care and concern that the Savior has poured out in terms of thinking through how we will open, where we can open, and what needs to be in place to open, just lets me know that He’s in charge.”

It gives me hope to know that our leaders are looking to the Lord as they reopen the houses of the Lord.

► You may also like: President Nelson on the difficult decision to close temples

The Power of Promises

On Thursday, August 6, the Church released another video about temples called “Temples Through Time.” The video includes quotes from Elder David A. Bednar of the Quorum of the Twelve Apostles and thoughts from scholars, ministers, people of various faiths, and members.

Baker attended the open house of the Paris France Temple after receiving an invitation from her Latter-day Saint friends. She said it was a beautiful building and noted how the temple’s interior design was a progression to a holy place (the celestial room).

“Having a sacred space to which you can go enables you to go out and bring that holiness into the wider sacred space that is the whole creation,” Baker says.

I thought her words were so powerful. We are able to bring the holiness we have felt in the temple into a wider sacred space, into the whole world.

A quote from Elder Bednar concludes the video:

A principal purpose of the temple is to elevate our vision from the things of the world to the blessings of eternity. Removed for a short time from the worldly settings with which we are familiar, we can "look to God and live" (Alma 37:47) by receiving and remembering the great and precious promises whereby we become partakers of the divine nature.

Bringing that holiness to the world as I remember the great and precious promises available in the temple gives me hope as I wait for temples to reopen.

► You may also like: 5 lessons I never expected to learn at the temple

I also find joy as I see temples nearing completion, like the Winnipeg Manitoba Temple which received its angel Moroni statue just last week. The Winnipeg temple is currently scheduled to be dedicated in November of this year, though the dedications of both the temples in Rio de Janeiro and Washington, DC (originally scheduled for May and December, respectively) have been indefinitely postponed due to the pandemic.

I believe in a few years, we will look back on 2020 and see the fulfilment of the desire to bring temples “closer to the expanding membership of the Church,” as stated by President Russell M. Nelson. I believe we will celebrate as we see newly constructed temples dedicated “on the ‘isles of the sea’ and in countries and locations previously considered by many unlikely to warrant a temple,” quoting Elder Bednar.

And so, I hope because not only will temple doors eventually reopen, but with time, more temple doors will open than ever before.

Update: This story has been updated to include information about recently announced groundbreakings:  the Salta Argentina Temple (October 9), the Taylorsville Utah Temple (October), and the Red Cliffs Utah Temple, the Bentonville Arkansas Temple, and the McAllen Texas Temple (November).

President Nelson taught us that "each temple is a house of learning. There we are taught in the Master's way. His way differs from modes of others. His way is ancient and rich with symbolism. We can learn much by pondering the reality for which each symbol stands."

With 175 separate entries, this volume explores a variety of these rich symbols and truths regarding ancient and modern temples. Listed in alphabetical order for convenient references, the entries deal with a broad range of categories, including temple architecture, rituals and ordinances, sacred clothing, sacrificial offerings, geometric symbols, colors, heavenly bodies (sun, moon, stars), prayer and revelation, sacred names, religious festivals, and more. This thorough, yet accessible collection allows each of us to gain a greater understanding of valuable symbols, enriching our temple experience and giving each of us a clearer vision of the many ways our temple worship points us toward Jesus Christ. Available now at DeseretBook.com.