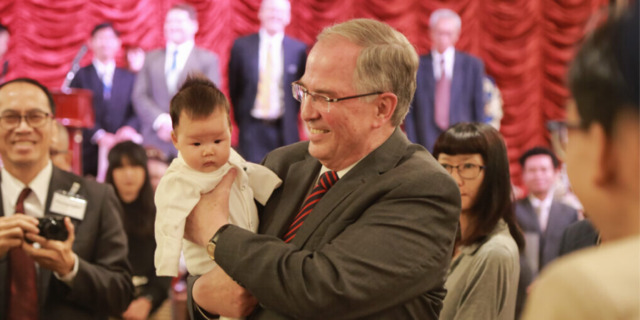 4 Lessons Elder Andersen Has Learned from “Sheltering in Place”

The latest article is an interview with Elder Neil L. Andersen. As part of the article, Elder Andersen shared four personal lessons he has learned during the COVID-19 pandemic.

Two of the lessons Elder Andersen has learned involve his family. He told Church News he has found a renewed appreciation for his wife Kathy and wants to verbally express more appreciation for her. He also has realized the importance of testifying about the Savior to his own family.

“I realized I need to speak more directly to those who are closest to me—to my children, to my grandchildren—about the things I speak to the world about all the time,” Elder Andersen said.

After having surgery in early March on his rotator cuff, a third lesson Elder Andersen has learned during this time is an appreciation for those that have daily physical or emotional challenges.

Although Elder Andersen has stayed connected with the Brethren in the First Presidency and the Quorum of the Twelve Apostles via technology, he noted that he misses being “shoulder to shoulder with them.” He also expressed that he has a newfound appreciation for them.

“I have a great appreciation for the unbelievable blessing of sharing my life with people of enormous testimony, faith, and personal character,” he told Church News.

In addition to the personal lessons he's learned, Elder Andersen shared with Church News how this can be a time of great learning for each of us.

Find more counsel from Elder Andersen in his latest book, The Divine Gift of Forgiveness. In this book, Elder Andersen writes especially to those who are "awakening" unto God—those who are just beginning to discover or who seek the divine gifts and power of repentance and forgiveness in their lives. Available now at DeseretBook.com.