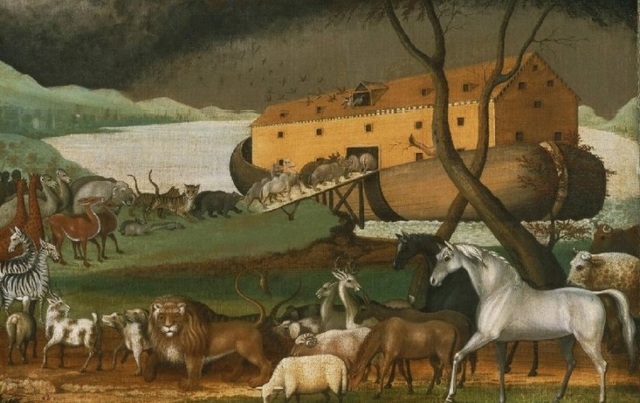 5 Answers to Difficult Questions About Noah and the Flood

The account of Noah’s Flood in Genesis 6–8 has long fascinated readers of the Hebrew Bible (or the Christian Old Testament). Additionally, Latter-day Saints benefit from restored details of Noah and the flood contained in the Book of Moses in the Pearl of Great Price (Moses 8). But there are still many questions about the flood that readers of the Bible (Latter-day Saint or otherwise) have raised and grappled with. Here are five such questions that are worth pondering as one encounters this remarkable myth.*

(*Note: I use the word “myth” here not to mean a story that is false or made up, but in the academic sense of a sacred story involving God’s interactions with humankind and the world that attempts to communicate timeless truths.)

Why are there non-biblical flood traditions that parallel Genesis?

With the rediscovery of the great civilizations of Mesopotamia (including Sumer, Babylonia, and Assyria) in the 19th century came a deluge of long-lost texts and myths. Surprisingly, this included a number of stories involving heroes surviving catastrophic floods. The epics of Gilgamesh and Atrahasis from the second millennium BC come immediately to mind. Scholars have pointed out the clear parallels between these earlier myths and the stories in Genesis (including Noah’s Flood).

Of course, the exact relationship of these various stories remains debated. Latter-day Saint scholar Hugh Nibley, for instance, theorized that these myths derived from the same earlier event but were transformed over time as they were handed down through generations. Other scholars argue for direct literary dependence between Genesis and the earlier Mesopotamian material. Whatever their relationship, scholars agree that the flood stories of Mesopotamia and the story of Noah’s Flood all participated in the same broader literary and mythic culture of the ancient Near East.

Why do the number of animals that went into the ark vary in the Bible?

Open any child’s Bible picture book, and you’ll likely see pairs of cute, lovable animals entering Noah’s ark: lions, giraffes, elephants, monkeys, camels, zebras, pandas, deer, etc. Male and female, two by two. This is based on God’s commandment given to Noah in Genesis 6:19–20: “And of every living thing of all flesh, two of every sort shalt thou bring into the ark, to keep them alive with thee; they shall be male and female ... two of every sort shall come unto thee, to keep them alive.”

It seems simple (and logical) enough: Noah should bring a male-female pair of each kind of animal with him into the ark. But in the next chapter, the number of animals God commands Noah to bring into the ark is different. “Of every clean beast thou shalt take to thee by sevens, the male and his female: and of beasts that are not clean by two, the male and his female. Of fowls also of the air by sevens, the male and the female; to keep seed alive upon the face of all the earth” (Genesis 7:2–3). Here Noah is commanded to take seven pairs of clean animals and one pair of unclean animals.

One way scholars account for this divergence is by postulating that the flood story in Genesis was composed by an author or redactor (editor) who wove together at least two different sources (whether oral or written) together into one flowing narrative. In one, Noah offered sacrifice, and so needed more animals of the clean kind for sacrifice, but in the other, no such sacrifice happened, and so only pairs were necessary. This line of reasoning is part of what is known commonly as the Documentary Hypothesis for the composition of the first five books of Moses. While Latter-day Saints need not automatically accept all of the propositions laid out by source critics (scholars who attempt to identify the various sources that went into the books of the Bible), they should nevertheless be open to the possibility that, much like the Book of Mormon and the Doctrine and Covenants, the book of Genesis underwent a complex history of composition and editing.

How does the Joseph Smith Translation help us understand the flood?

Beginning shortly after the founding of the Church of Christ in 1830, the Prophet Joseph Smith undertook what he called a “new translation” of the Bible that included restoring lost narratives, correcting mistranslated passages, updating the archaic language of the KJV, and providing prophetic commentary and harmonization on important scriptural accounts. Commonly called the Joseph Smith Translation (JST) by Church members today, Joseph Smith’s efforts in revising the Bible touched on the story of Noah’s Flood. For instance, Genesis 6:6 reads: “And it repented the Lord that he had made man on the earth, and it grieved him at his heart.” To help avoid possible confusion over the idea that God had to “repent” of something, the Prophet rendered this passage: “And it repented Noah, and his heart was pained that the Lord had made man on the earth, and it grieved him at the heart.”

This change, however, reflects an issue with an archaic English meaning of “repent” as “to be sorry,” which is what the word in Hebrew (nicham) means. Without understanding this older definition of the word modern readers might mistakenly think that God had to repent of some sort of sin, and so the Prophet made a clarifying change to the English text of the KJV. These sorts of changes to the flood story in the JST are best understood not as restorations of a pristine “original” version of Genesis but rather as the Prophet helpfully guiding modern readers through some tricky issues with the often outdated English of the KJV. It can be useful to look more at what the Prophet changed the text from than what he changed it to, since he sometimes translated the same passage different ways.

Was the flood the "baptism" of the earth?

Beginning with William W. Phelps in the 1830s, some Latter-day Saint leaders and scriptural commentators have speculated that Noah’s Flood was a sort of “baptism” for the earth. The thinking behind this idea is essentially that the earth is a living entity, and so needs the ordinance of baptism to achieve its promised celestialization (D&C 88:18–19). While this has been a common understanding, there are other ways of thinking about the Flood, such as a symbolic cleansing of the earth rather than an actual ordinance. As Paul Hoskisson and I explore in our recent article, there are a number of scriptural and prophetic statements that must be accounted for in understanding the symbolic or doctrinal significance of the flood. At this point, we simply don’t have enough revealed information about any larger metaphysical truth about the flood to make any definitive claims.

Was the flood a global or local flood?

Modern believers are confronted with geological and other scientific evidence (in addition to the ancient literary context of Genesis) that casts serious doubt on the feasibility of a worldwide catastrophic flood sometime (presumably) around 3,000 BC that wiped out all animal and human life save that which was spared on Noah’s ark. In response to these challenges, some have wondered if perhaps the flood described in Genesis drew from memory of a localized event, perhaps a particularly bad flooding of the Tigris and Euphrates rivers. Given the somewhat ambiguous meaning of the Hebrew word eretz (“earth,” “land”), rather than the “earth” (meaning the spherical globe) being entirely flooded, instead perhaps Genesis meant to convey that the “earth” (meaning the land or local region where Noah dwelt) was inundated (Moses 1:29). Or perhaps a local flood was mythologized into a global one to symbolically signify the renewal or recreation of the earth from out of a primordial universal ocean (Genesis 1:2).

Latter-day Saints have likewise wrestled with this question and have come to varying conclusions (some more traditionalist, others more moderate). Apostle John A. Widtsoe acknowledged in 1943 that from a revelatory point of view we simply do not know enough to conclusively settle this matter. “The fact remains that the exact nature of the flood is not known. We set up assumptions, based upon our best knowledge, but can go no further.” He continued:

We should remember that when inspired writers deal with historical incidents they relate that which they have seen or that which may have been told them, unless indeed the past is opened to them by revelation. The details in the story of the flood are undoubtedly drawn from the experiences of the writer. Under a downpour of rain, likened to the opening of the heavens, a destructive torrent twenty-six feet deep or deeper would easily be formed. The writer of Genesis made a faithful report of the facts known to him concerning the flood. In other localities the depth of the water might have been more or less. In fact, the details of the flood are not known to us.

While readers may answer these questions differently for themselves, I hope that I have at least provided some worthwhile material to study and some points to consider as we re-read the story of Noah in the Old Testament this year in Gospel Doctrine class and prayerfully search out the rich treasures of knowledge that can be found in this remarkable book of scripture.

Paul Hoskisson discusses the Flood and symbolism in the Hebrew Bible in this interview with LDS Perspectives Podcast.

You can also access a transcript of the interview.

Stephen O. Smoot received a Bachelor’s degree from Brigham Young University in Ancient Near Eastern Studies with a concentration in Hebrew Bible studies. He is currently finishing a master’s degree in Near and Middle Eastern Civilizations from the University of Toronto with a concentration in Egyptology. He is a co-editor of Knowing Why: 137 Evidences that the Book of Mormon is True and blogs on Latter-day Saint topics at Ploni Almoni: Mr. So-and-So’s Blog.