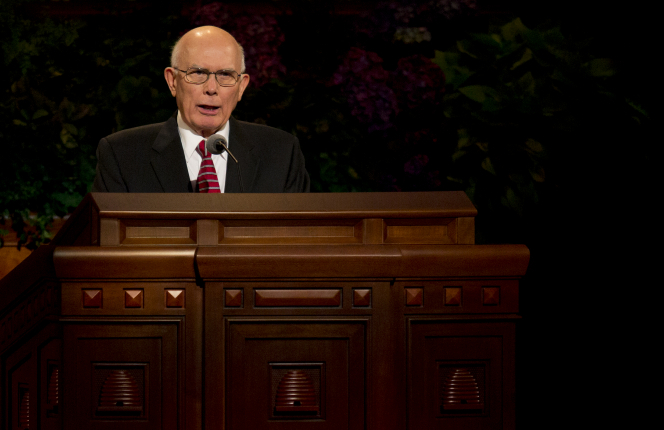 President Oaks’s mother, Stella Harris Oaks, was a big fan of the work of Cyrus Dallin, a Utah artist. She was present at the unveiling of The Pioneer Mother, a monument in Springville, Utah made by Dallin. This unveiling was only three weeks before Elder Oaks was born, and Stella afterward decided to name her son "Dallin" after the artist.

He started working hard to support his family at age 11

When President Oaks was only seven years old, his father died of tuberculosis. To support his widowed mother, President Oaks started his first job sweeping out a radio repair shop at age 11.

He had to learn to test the tubes he found on the floor, to find out if some were still good, and that led to an interest in radio. He threw himself into study with characteristic intensity. Before he was 16, he had obtained a first-class radiotelephone operator's license, which allowed him to operate a commercial radio station’s transmitter, and he found a job in radio. Station managers liked to hire a “combination man”—a transmitter engineer who could double as an announcer—“but my voice hadn’t changed,” he recalls, laughing. Before long, however, that change took care of itself, and he was working regularly as an announcer and an engineer. (LDS.org--Read the full article here.)

He was president of Brigham Young University from 1971 to 1980

In this capacity, he oversaw the start of the J. Reuben Clark Law School. Later, his own law degrees and experience came in handy when he had to persuade the Education Department to allow BYU to require single students to live in gender-specific housing. The  U.S. Department of Health, Education, and Welfare was trying to pass Title IX, a law that, if passed, would have required BYU to permit coed habitation.

President Oaks was sustained as an apostle on April 7, 1984

However, he wasn’t ordained to the apostleship until May 3 because he still had commitments as a judge. On the shift from judge to apostle, President Oaks said,

Many years ago, Thomas Jefferson coined the metaphor, "the wall between church and state." I have heard the summons from the other side of the wall. I’m busy making the transition from one side of the wall to the other.

When he was ordained, he was the youngest apostle (at age 51) since President Packer, who was called at age 45.

And he accompanied President Monson to gift U.S. President Barack Obama with five leather-bound volumes of Obama’s family history. President Oaks and President Obama reportedly talked about their shared passion for the law.

To learn more about President Oaks's remarkable life, be sure to read Life's Lessons Learned. In the intro, Presidnet Oaks says, "I have learned things that have shaped my life and teachings, including some things of the heart not previously shared. This is an autobiography of learning and application rather than a compendium of doctrine."
-->Find it at DeseretBook.com