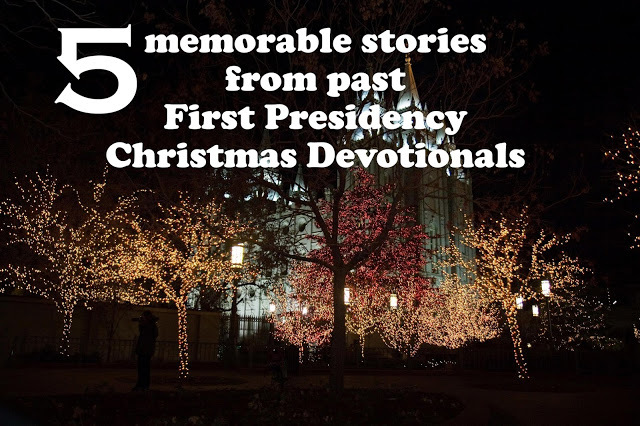 We are blessed to be in a Church with such wonderful story tellers! What tender reminders of the joy of this season from our beloved prophets and Church leaders.

The new Christmas message found on mormon.org is a reminder of what this season is about: A Savior was born, over 2,000 years ago.

Here are some stories from past First Presidency Christmas Devotionals to help you feel the spirit of Christ this Christmas season.

A few years ago we had a daughter living in Connecticut. She attended a Relief Society meeting one evening at which everyone was invited to share a story from the life of one of their ancestors. She listened to a sister named Donna tell a story which has had a great deal of meaning to her family through the years and which involved a simple act of kindness shown at Christmastime. Our daughter was amazed to hear that the name of the person who had shown kindness was her own great-great-grandfather. It was a sweet experience as our daughter and Donna shared notes after and realized how their ancestors had touched each other’s lives.

With the permission of Donna, I would like to share a portion of her story. It took place in a small town in Utah in December of 1901. There was a family with a mother, a father, and eight children. The year had been difficult, with one of the children suffering poor health, which drained the resources of the family and the energy of the mother. On Christmas Eve, the mother told her excited children that Santa would not be coming that year. She simply had not been able to manage the money or energy to make anything to give her children for Christmas. The older children were still hopeful, and the oldest son began to hang stockings on the mantle. His mother gently told him that Santa was not coming, but the boy insisted she must be wrong. Finally the mother suggested that instead of hanging stockings, they put a plate on the table for each person in the family. It gave the children reassurance that they would receive something, so they went off to bed.

On Christmas morning, the children all awoke, got dressed, and eagerly went into the dining room to see what gift they had received. On each of the plates they found a large dill pickle. Tears of disappointment filled their eyes, and they turned to go back to their bedrooms so their tears wouldn’t be noticed. Their mother noticed: “Children, I didn’t have anything else, and I just couldn’t bear to leave your plates empty.” Her voice broke but she went on bravely, “We have a lot to be grateful for.” Their father joined in and reminded them that they were indeed blessed with many things, including a loving family, the improved health of those who had been ill during the year, and food for their table. Their spirits brightened, and as they began to celebrate the day, the oldest son bumped the table and was amazed to find a dime lying near his plate. He was convinced that Santa had come and had left a dime for them to buy some candy. He put on his coat and raced out the door.

The stores were all closed; however, Jed Stringham, who ran the local grocery store, happened to live right next door to his store. The boy knocked on the door of Jed’s home and apologized for disturbing him on Christmas Day but explained that Santa had left a dime for them and he was hoping Brother Stringham would open his store and sell him some candy for the little ones at home.

Jed answered, “You bet I will. Come.” When the boy got home he was carrying a large bag of candy and excitedly explained that Brother Stringham had taken a scoop from each tray of candy, from hard tack to the very best. He had given it to him, saying, “Take this dime’s worth home to those little ones, and enjoy some yourself.” It was obvious that Jed Stringham had been very generous and had given him much more than a dime’s worth. There was plenty for each child to enjoy. The children remember their mother saying, “God bless Brother Stringham.” What he did was not a huge sacrifice, and it really took very little effort, but the story of the miraculous dime and Brother Stringham’s candy meant enough to this family that it was written down and has been told and retold in Donna’s family for years. Sometimes, small things mean the most.

As our daughter Emily listened to this story, she recognized the name Jed Stringham as being her great-great-grandfather and was touched that he had not only opened his store but his heart with his simple act of kindness on that memorable Christmas morning. Our family had never heard this story before, and we now feel blessed to have received a copy, which will become a part of our family history. It reminds both of our families that those who have made covenants to be witnesses of the Savior of the world should always strive to be generous with their time and means to bless the lives of those around them—and especially at Christmas when the hearts of children and parents are most tender.