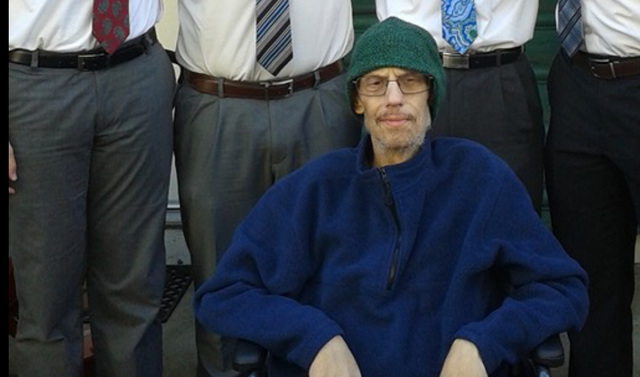 David Tarabini had pancreatic cancer; he was weak and tired, but he was recovering. Every Friday, chemotherapy treatments always drained most of his energy, but each time returning home, he would have to ascend the stairs to his second story apartment.

This Friday was no different from any other Friday after chemo. The challenge to reach the top of the stairs was the same; the pain and the weakness was the same; the paralyzing fear and trembling came once again. Walking alone was difficult, so David mostly used a wheelchair and attempting to walk up the stairs meant the possibility of falling and injuring himself.

“We sit at the bottom of the steps while he looks up, steeling himself against the inevitable panic attack that takes hold midway up, trying to decide if he should scoot up backwards or attempt to walk, allowing me to half drag/half carry him,” wrote Dina Tarabini, David’s wife, on a Facebook post. “Every week I watch this panic take over and reduce him to shaking and sobbing.”

It was then that the first miracle happened for David. On this day, four elders happened to be passing through on their way up to their own apartment and saw David and Dina struggling at the stairs.

“We offered to help and without another word picked Dave up in his wheelchair and brought him to his apartment,” said Erick Achal, one the missionaries who served there. “As we were coming down the stairs Dina was in tears thanking us and letting us know that he hadn't had a peaceful Friday in years. We told her that we would be back the next week and every week that followed.”

Missionaries in the California Santa Rosa Mission visited with the Tarabini family times before (they were neighbors since the middle of August 2016), but the family did not seem to be that interested in the gospel. David did, however, find the story of the Restoration intriguing—he felt the Spirit testify there must be something more. 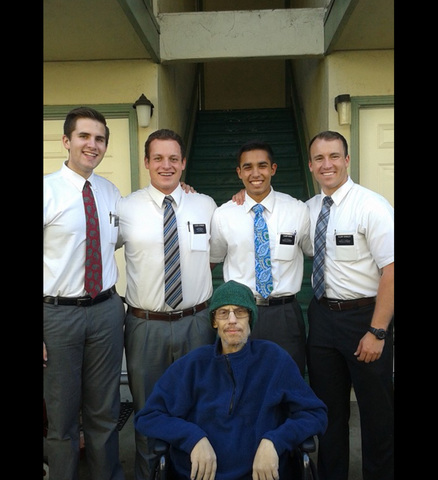 After this service, the family opened up and received the message of the gospel. The missionaries met with David two to three times a week and he made a lot of progress. Later, however, more devastating news came.

The missionaries received a call from Dina asking them to come over right away. Dropping everything, they rushed to the Tarabini’s home.

“When we got there, Dave was in the living room and he looked hopeless,” Achal said. “We got to talking and he told us that his cancer had resurfaced and that he had less than two weeks to live. At this point, he started bawling and was inconsolable. He looked at us and said, ‘Give me something, anything!’”

The elders immediately began sharing scriptures to give peace and comfort, and afterward gave him a priesthood blessing. Then the second miracle happened.

“We showed up the next day and all of the fear that was in his eyes the night before was gone. We asked him what had changed and he said, ‘I just know that God is going to take care of my family and that everything will be alright.’ The Holy Ghost had spoken peace to his heart and from that point on he faced every minute he had left with faith,” Achal said.

The third miracle came as David and Dina’s response after the priesthood blessing. They still put their trust in God and cast the fear of the unknown aside.

The missionaries continued to meet with David almost every day and even set a baptismal date, but because of his health, David was not able to be baptized before he passed away on November 4, 2016.

But then a fourth miracle came—one David and Dina taught the missionaries. Achal expressed how this experience impressed his life forever:

“He taught me so much about being grateful in any circumstance, how to love your wife and children unconditionally, how a faith in God will bring you peace, and so much more. I will forever cherish the time that I got to spend with him and his family. They will always hold a big place in my heart.”

The fifth and final miracle came when, after requesting permission from the first presidency, David Tarabini was baptized by proxy after his death. Two of the missionaries were able to perform the ordinance on January 19, 2017, in the Oakland California Temple. The missionaries, the Tarabini family, and many others have been greatly touched by this experience and will forever remember the strength that comes through Christ.