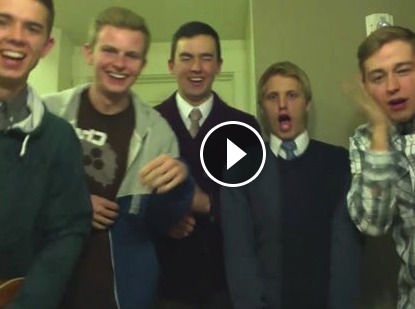 After returning from their missions in the Philippines, five LDS returned missionaries have started on a new mission: to share clean humor with the people of the Philippines.

Sumner, Connor, Jake, Tylan, and Davis put their first video up on October 1, 2014, and since then the aggregate views on their comedy shorts have reached into the millions.

After returning home, as most missionaries quickly realize, keeping up with that language and those people became much more difficult.

The name they post their videos under is "The Hey Joe Show" (though none of the participants is named Joe). They explain that the chose the name based on the common phrase "Hey Joe!" which the Filipinos yelled at the American missionaries to get their attention.

The Hey Joe Show has tens of thousands of followers on social media channels and continues to accrue views on their spirited YouTube videos.

Since they've become an online sensation, the fivesome has been stopped by Filipinos living in the US who recognize them from their show. They've also had requests to go to different places to do meet and greets--but all they want to do is go back to the Philippines this summer. Currently, they're trying to raise the money to make the trip, and sharing their testimonies with the Filipino people again, a possibility.

"While in the Philippines, we hope to magnify our missionary work previously done while we were serving our missions," they say, "by working with local church leaders to arrange a series of firesides, with the intent of sharing with the youth our testimonies and religious convictions. Had it not been for our missions, we would never have been able to get to the Philippines the first time. In our return trip, we hope to pay it forward by sharing some of the valuable lessons we learned while serving there."

You can follow the fivesome at HeyJoeShow.com for more on their videos and trip updates.