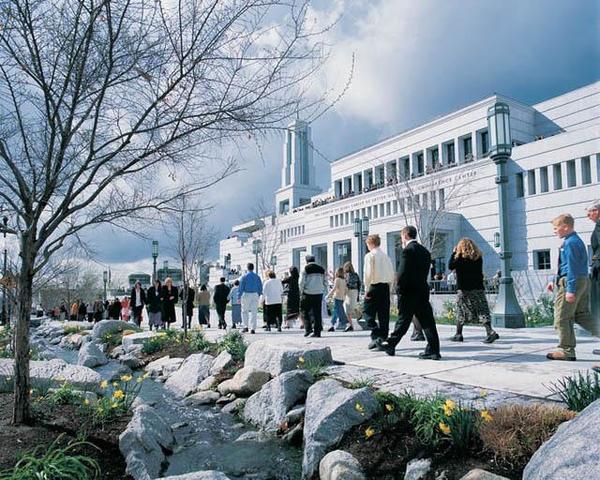 Recently, list25.com published an article highlighting topics in Church culture or doctrine that might be considered strange to people who are not members of the Church.

The article, "25 Bizarre Mormon Rules You Won’t Believe Are Real," highlighted some things that are true about Mormonism, but also added things that were not entirely accurate about what Mormons believe or practice.

However, because these topics often come up when discussing Church doctrine and topics, we thought it might be useful to point out how ideas for these "rules" might have started and what is true and what is not about them.

1. "Since Satan allegedly has power over the lakes and rivers, Mormon missionaries aren't allowed to swim."

However, this idea may have originated from the saying "Satan has dominion over the water," which likely stemmed from the events that lead to Doctrine and Covenants section 61. This section came in part as a response to the vision Elder William W. Phelps saw while traveling with Joseph Smith via canoe.

On the 9th, in company with ten Elders, I left Independence landing for Kirtland. We started down the river in canoes, and went the first day as far as Fort Osage, where we had an excellent wild turkey for supper. Nothing very important occurred till the third day, when many of the dangers so common upon the western waters, manifested themselves; and after we had encamped upon the bank of the river, at McIlwaine’s Bend, Brother Phelps, in open vision by daylight, saw the destroyer in his most horrible power, ride upon the face of the waters; others heard the noise, but saw not the vision (History of the Church 1:202–3).

Though the section never says "Satan has dominion over the water," the saying was passed around and used as an excuse for why missionaries could not swim or participate in water sports.

2. You are not allowed to get tattoos. If you join after having them, you may be asked to get laser removal.

If you know people with tattoos, don’t judge them for it. That would just push them away. Be kind, and be their friend. If the subject of tattoos comes up, rather than condemning their decision to get a tattoo, talk about why you treat your body the way you do. Learning about who they are and what kind of gift their body is may help them feel the Spirit and come closer to the Savior (David A. Edwards, "Think Before You Ink," lds.org).

However, the idea that members are asked to have their tattoos removed could come from potential missionaries with tattoos being chosen to serve a mission where their "tattoo is either culturally accepted or to a colder climate where long sleeves, and tights for women, will cover their tattoos," according to lds.org. It is also possible that, depending on what the tattoo is depicting, some members with tattoos may not be allowed to serve missions, according to lds.org.

While members should never ask others to remove their tattoos, we do view our bodies as sacred gifts from Heavenly Father and that's why we avoid getting tattoos ourselves. But we also believe in agency and being respectful of others.

3. Only men who have completed their mission are supposed to marry (returned missionaries).

This is not true, as many married LDS men who did not serve missions, including Donny Osmond and Steve Young, can attest.

However, this idea likely came from some members who create a make-or-break list of requirements for their future spouse. While determining a list of desirable attributes in a future spouse is a personal thing, what goes on the list should be chosen with care.

"A lot of attributes can be harmful if you kind of add the end-all to the list," licensed marriage and family therapist Nikki Harmon says. "I think it’s a really good thing to say, 'I want to marry someone that served a mission.' However, what happens when you meet someone who is a convert and got baptized to the Church when they were 22 and didn’t have the opportunity to serve a mission but are very strong in the gospel? They're committed, they have a strong testimony. That might make you overlook some good prospects because you can’t check that off."

► You'll also like: Are "Checklists" for What We Want in Our Future Spouse a Good Thing? Marriage Expert Explains

4. There is a dress code for church. Women can't wear pants and men have to wear a suit or a white shirt and tie.

While members do tend to dress in more formal attire like suits for men and dresses or skirts for women, there is no specific dress code for Church members limiting men to wearing white shirts and prohibiting women from wearing pants to church.

In fact, if members or visitors do not have dresses, skirts, or suits, it is acceptable for them to wear their best clothing to church.

In a Mormon Newsroom article for first-time visitors to a Mormon church service, it mentions, "You’re welcome to wear any clothes that you feel comfortable attending a church service in. Men typically wear suits and ties, and women wear dresses or skirts. Children also usually dress up."

This dress code idea likely comes from members tending to dress up to show respect for the sacredness of renewing their covenants, but there's no stipulation on men wearing white shirts or women not being allowed to wear pants.

5. On Sundays, the only thing you are allowed to do is go to church (you can't even watch TV!).

While we do believe in keeping the Sabbath day holy, there would probably be revolts in many LDS homes if TV was banned on Sundays for all Mormons.

That's not to say that some LDS families prefer not to watch TV on Sundays as a personal way of keeping the Sabbath holy, but it's not the case for all LDS families.

And we do go places other than Church, including visiting family, helping at homeless shelters, volunteering at hospitals, etc. Basically, members are encouraged to keep the Sabbath day holy and serve God on Sundays instead of pursuing personal endeavors or recreational activities.

“If thou turn away … from doing thy pleasure on my holy day; and call the sabbath a delight, … and shalt honour [the Lord], not doing thine own ways, nor finding thine own pleasure, nor speaking thine own words:

Because how members choose to keep the Sabbath day holy can vary, it's easy to see how the idea that Mormons are not allowed to go anywhere or watch TV on Sundays began.

And while we try to avoid activities that detract from the holiness of Sundays and that may include certain TV shows or going certain places, we are allowed to do things other than attending church.

► You'll also like: Why I Keep the Sabbath Differently Than You & Why That's a Good Thing