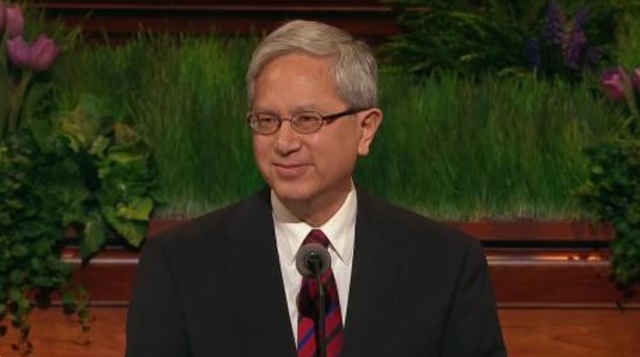 5 Things You Should Know About Our New Apostle Elder Gong

During the Saturday morning session of general conference, Elder Gerrit W. Gong was called as one of our new apostles. He was sustained as a General Authority Seventy of The Church of Jesus Christ of Latter-day Saints on April 3, 2010. Later, he was called to the Presidency of the Seventy on October 6, 2015. Here are a few facts about this new apostle you should know:

1. Elder Gong is a California native with Chinese ancestry.

Gerrit Walter Gong was born in Redwood City, California, on December 23, 1953, and he shares a birthday with Joseph Smith, who was born December 23, 1805. Elder Gong's parents are Walter Gong and Jean Char, who raised Elder Gong in Palo Alto, California. Both of his parents have Chinese ancestry. Elder Gong was named for LDS convert Gerrit de Jong Jr., who was the first dean of the College of Fine Arts at Brigham Young University and who wrote the words and music for the hymn "Come, Sing to the Lord."

2. Elder Gong served a mission in Taiwan and later served as a member of the Asia Area Presidency.

Elder Gong has spent his life in the service of the Church, serving as a missionary in Taiwan and later in his life as a seminary teacher, bishop, stake mission president, stake president, and Area Seventy. Elder Gong served in the Church's Asia Area Presidency headquartered in Hong Kong from 2011 to 2016, becoming the area president in 2013. When Elder Rasband was called to the Quorum of the Twelve Apostles, Elder Gong was called to serve in the Presidency of the Seventy, where he served on the Church Board of Education and Boards of Trustees.

Elder Gong first met his wife, Susan Lindsay, in the MTC. He was teaching new missionaries about Taiwanese culture, and Sister Susan Lindsay was a missionary preparing to serve at the time. Years later, the two reconnected and began dating before becoming sealed in the Salt Lake Temple on January 2, 1980. They are the proud parents of four sons.

4. Elder Gong has improved international relations through his career.

Elder Gong has led a life of seeking knowledge and improving international relations. He received a bachelor's degree in Asian and university studies at BYU before becoming a Rhodes Scholar at Oxford, where he received a masters of philosophy and a Ph.D. in international relations. He later served as a professor at Georgetown University and Johns Hopkins University before becoming a special assistant in the U.S. State Department and later a special assistant to the U.S. ambassador in Beijing, China. Beginning in 1989, Elder Gong served in different positions at the Center for Strategic and International Studies in Washington, D.C., before becoming an assistant to the president for planning and assessment at Brigham Young University.

5. Elder Gong has a strong testimony of the Lord.

In his last general conference talk in April 2016, Elder Gong shared ways we can always remember the Lord:

First, we can always remember Him by having confidence in His covenants, promises, and assurances. . . .

Second, we can always remember Him by gratefully acknowledging His hand throughout our lives. . . .

Third, we can always remember Him by trusting when the Lord assures us, “He who has repented of his sins, the same is forgiven, and I, the Lord, remember them no more.” . . .

Fourth, He invites us to remember that He is always welcoming us home. . . .

Fifth, we can always remember Him on the Sabbath through the sacrament. . . .

At times in history, mortal men have been executed by crucifixion. But only our Savior, Jesus Christ, embraces us still carrying the marks of His pure love. Only He fulfills the prophecy of being lifted up upon the cross that He might draw each of us, by name, to Him.

“Yea, they may forget, yet will I not forget thee.

“Behold, I have graven thee upon the palms of my hands.”

He testifies: “I am he who was lifted up. I am Jesus that was crucified. I am the Son of God.”

I humbly testify and pray that we will always remember Him—in all times, all things, and all places we may be in.