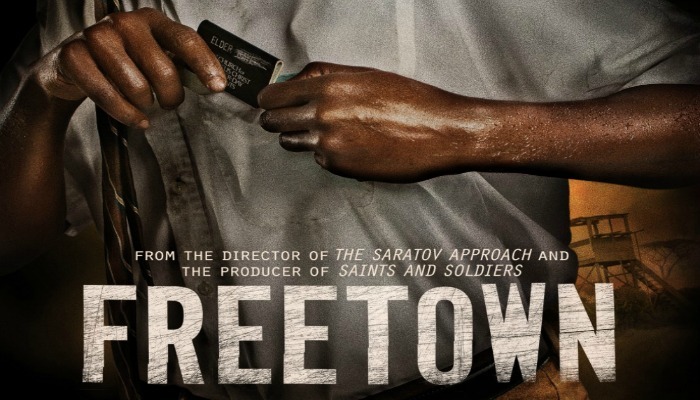 Freetown is the next missionary thriller from the makers of the Saratov Approach. The story depicts the desperate journey of Liberian missionaries caught in the middle of a brutal civil war. With their teaching stymied by the conflict, they flee the widespread violence of their native country for a new place where they can continue to proselyte: Freetown, Sierra Leone.

A thrilling story told in beautiful detail, Freetown promises to live up to its hype. After seeing it for the first time, Elder Menti, one of the young men depicted in the film, said, "As I sat in my seat it was just like I was reliving the events, just as vivid as they were."

The movie releases to general audiences starting April 8th. But before you go, here are a few things you should know about the movie that will really help you get into the story:

1. Local cast and crew were used whenever possible.

“I’m a big proponent for authenticity," director Garrett Batty says. "I wanted to make sure the film felt as real as possible." As a part of making the film feel authentic, the producers chose to stick with locals when casting the movie and staffing the film crews.

“Ghana has a wealth of talent, both in front of and behind the camera,” adds producer Adam Abel. Knowing that the producers used local talent really adds to rich experience of watching this amazing story as it unfolds.

2. The entire movie was shot on location in Africa.

Though the story is set in Liberia and Sierra Leone, filming was done in Ghana. “We were keeping an eye on the ebola outbreak, while we already had some contacts in Ghana who were ready to work with us,” said Abel. “We chose Ghana.”

Batty explains, "You absolutely cannot fake the West African landscape.  When you’re on location as opposed to a closed set, you can lose control very easy--the weather changes;  you lose light faster than you think."

Not only was Freetown shot entirely in Africa, the filming process took only four weeks.

"It’s a testament to the resourcefulness of our Ghanaian crew that we were able to shoot Freetown on time and on budget," Batty says.

3. Three of the actors portraying missionaries in the film are actually LDS themselves.

While most of the cast and crew were from west Africa, only a handful were Latter-day Saints. One actor in each companionship shown in the movie was LDS--two are returned missionaries, and one is preparing to go on his mission.

4. There were actually eight missionaries that made the trip, not just six.

Though the film only shows six missionaries on the dangerous trip (in addition to the member that helps them), the actual story included eight missionaries. Producers decided to cut the number for filming purposes.

But knowing the actual number of participants does make you wonder how much more complicated the logistics of their travel were.

5. Phillip Abubakar, the man who took the missionaries to the border, wasn't married at the time of their trip.

In the movie, Brother Abubakar is given advice by his wife that helps him through the journey. However, he was not married at the time he left Liberia. The producers added this element to help round out the character.

Abubakar did marry later, after arriving in Sierra Leone.

Knowing this tidbit resolves a question some viewers may have at the conclusion of the film.

6. After the missionaries arrived in Sierra Leone, the number of branches in the area quickly doubled

Those most of the missionaries had not left Liberia before, their drive to continue teaching proved to be a huge blessing for the saints in Africa. After arriving in Sierra Leone, the baptism rate increased dramatically and the number of branches in the area quickly doubled.

“All that was seriously needed to open the branches was more priesthood,” recalled Walter Stewart, a senior missionary from the United States who was also living in the Freetown mission home. They “brought a powerful spirit of faith and devotion to this part of the mission, certainly bred out of the agonizing they have suffered in their beloved homeland. They are first to recognize the hand of the Lord in this modern miraculous exodus."