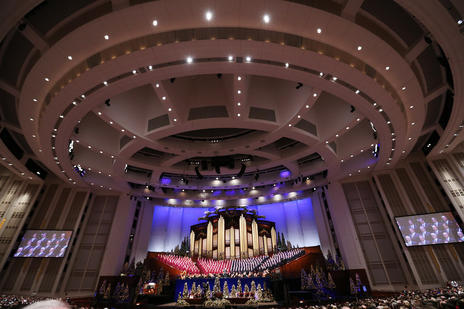 To add a little uplifting Christmas cheer to your day, check out these touching Christmas stories shared from our Church leaders.

In the annual First Presidency Christmas devotional for The Church of Jesus Christ of Latter-day Saints, church leaders share stories of gratitude and love to evoke the Christmas spirit.

In the most recent devotional, President Dieter F. Uchtdorf of the First Presidency told the story of a man in Africa who had never been able to walk. One day, he attended a church-sponsored event where he had the opportunity to use a wheelchair. He was joyful as he freely moved about. When church members told him the wheelchair was his to keep, the man could not contain his happiness and began to weep.

Here are six additional stories church leaders have shared in past Christmas devotionals.

President Thomas S. Monson conveyed the spirit of Christmas in his message from the devotional in 2009by sharing a story about travelers stranded at a tiny gate in the Atlanta airport. It was December in 1970, and an ice storm had delayed travel for people trying to get home for Christmas. The frustration and anxiety of travelers grew as midnight arrived and the situation had not improved.

A conversation between a young soldier and a desk agent intensified as the soldier expressed his desire to get home and see his family since his unit was being deployed to Vietnam immediately after the holiday. If he did not make it home for Christmas, the young man did not know when he would see his family again. The agent told him that he would not be able to go anywhere for the next 24 hours.