While working at Disney for a decade, Jared Beckstrand helped create many of the Disney characters we have come to love—from Esmerelda (The Hunchback of Notre Dame) to Meg (Hercules) and Jane (Tarzan) to Pacha (The Emperor's New Groove). Find out more about how he shares his faith through art.

Growing up in Long Beach, California, Jared Beckstrand frequented Disneyland as a little boy, enjoying the splendor and magic of the park with his family. But soon, the rides, movies, and characters that made up Disney began to take on a new sort of fascination.

"When I got older, I started paying attention to the cartoons and the movies and realized they were created by people," Beckstrand says. "When you are younger you just think that they are real characters somewhere. But that just really intrigued me and I thought, 'That would be really cool to work there someday.'"

"That was kind of the beginning," Beckstrand continues. "It just fueled my fire to draw."

It's the dream of many aspiring artists to work at the company that "makes dreams come true," and it's one that Jared Beckstrand lived for a decade before relocating to Saint George, Utah, with his family. Over his career as an artist and an animator, Beckstrand has been able to work on many well-loved animated classics, helping to light children's imaginations around the world even as he followed his passion.

"My parents were always supportive and were like, 'Yeah, I think you could [work as an animator] if you kept working hard at it.' So I kept drawing and drawing all the time," Beckstrand says. "I would draw sports pictures from the newspaper because I love sports, and the combination of sports and drawing relates to figures in motion and so working as an animator made perfect sense to me."

Shortly after returning from a mission and starting a family of his own, Beckstrand landed a job at Don Bluth animation—a company started by Latter-day Saint Don Bluth and known for movies such as Anastasia, The Land Before Time, and An American Tale.

Images of Thumbelina, A Troll in Central Park, and Swan Princess from IMDb

Beginning his job as an assistant animator in 1990, Beckstrand worked on projects like Thumbelina and A Troll in Central Park. He also worked with Latter-day Saints Richard Rich (director) and Lex de Azevedo (composer) on the film The Swan Princess.

But soon word of mouth got around that Disney was looking to hire new assistant animators, and he landed one of the spots.

In 1994, after The Lion King had just come to theaters, Beckstrand started working as an assistant animator on the film Pocahontas.

For the next 10 years, Beckstrand worked on many other timeless Disney movies, including The Hunchback of Notre Dame, Hercules, Tarzan, Fantasia 2000, The Emperor's New Groove, Treasure Planet, Home on the Range, Chicken Little, and The Princess and the Frog, animating key characters like Esmerelda (Hunchback), Meg (Hercules), Jane (Tarzan), Pacha (Emperor's New Groove), Sarah (Treasure Planet), Maggie (Home on the Range), and Charlotte (Princess and the Frog).

► You'll also like: How a Mormon Helped Shape Mickey Mouse (+6 Other LDS Ties to Disney) 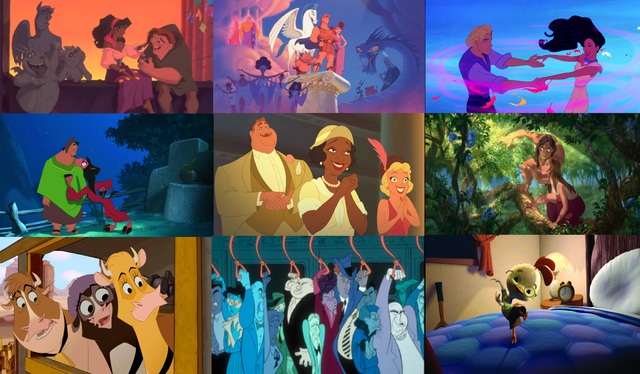 All images from IMDb

Talking about his favorite Disney projects to work on, Beckstrand says, "I have two favorite assignments. One was to animate Jane on Tarzan, and the other was to animate Pacha on The Emperor's New Groove—he's the big, burly character voiced by John Goodman. The Pacha character was more funny, slapstick, crazy-wild and I really enjoyed that movie for that reason. On Tarzan, there was some really cool acting scenes with Jane. I animated her up in the tree with Tarzan when they are trying to communicate."

In 2004, Beckstrand and his family relocated to Saint George, Utah—a move that put an end to his full-time work at Disney. However, Beckstrand still works as an animator with Y Draw, and he recently helped create the animation for the new movie Middle School: The Worst Years of My Life, a live-action movie about a young boy whose notebook drawings come to life. In addition, he helps create logos or artwork that he can share digitally.

Beckstrand's unique career allows him not only the opportunity to work from home and spend more time with his family but also gives him the chance to share his faith in unique ways:

Currently an artist for the Church's Friend magazine, Beckstrand turns significant scriptural stories or spiritual moments into works of art, sharing his testimony in a way that people of all ages can understand. In addition, while working on a project in Mexico City, Mexico, Beckstrand invited a co-worker to attend church with him, giving him a Book of Mormon and copy of Church magazines.

Looking back over his life and the success he has found doing the thing he loves, Beckstrand shares the advice, "If you have a passion for something and there is a place for it in the workplace, I would encourage people to follow their passion and they are more likely to be satisfied with what they are doing and be successful too."