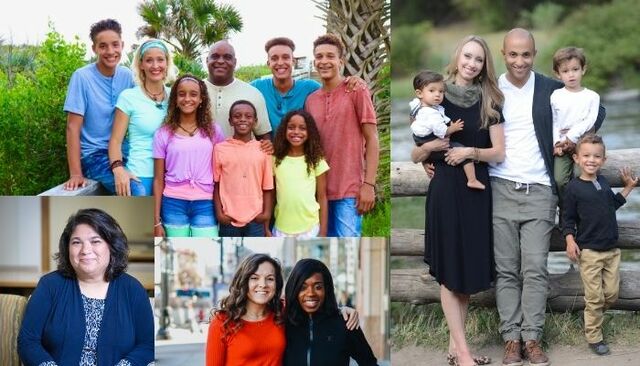 The year 2020 will be remembered for many significant reasons.  Among them will be the way in which the year reminded us that racial strife is not a thing of the past but something that very much still exists in our world. It is something that we at LDS Living hope will soon come to an end, but until that time, it is up to all of us to contribute to the conversation rather than attempt to silence it.

As Dr. Martin Luther King Jr. said, “In the end, we will remember not the words of our enemies, but the silence of our friends.” We are grateful for our friends who have refused to be silent and have instead used their words to bless our lives over the past year.

Here are eight thoughts shared by Latter-day Saints in 2020 that inspired us to be better disciples of Jesus Christ by being better neighbors and friends.

“Have I experienced racism in the Church? …We have got to figure out what our definition of racism is first. I think a lot of people are ignorant. I think a lot of people have prejudices—we all have prejudices. A lot of people can be discriminatory, and some are racist. I think I've experienced all of the above during my journey in this church. . . . People come out with what I would call just dumb comments. Other people generally have a problem with the color of my skin. And that hasn't been, luckily, it hasn't been a major factor. But I have been in church situations where people have expressed that they would rather not be there because of what I look like. And that's hard. It's hard to talk about, it's hard to say because I don't want to paint the Church or anyone in a bad light.

“I heard once that God has to work with imperfect people, it must be very frustrating. And we have to be tolerant towards one another, and we have to show love and sometimes you have to show love to people that don't love us. And that's been a hard lesson to learn. But, you know, I have not let it destroy me completely. There have been periods where it's been harder than others and it's caused me to question whether I even want to be part of this. But I think the overarching solution or idea or thoughts is that Jesus loves me. God loves me. He created me specifically, in the way that I am. And I've come to learn to love that. It's taken me a long time. It's taken me a long time to embrace that. It's taken me a long time to be true to who I am and comfortable in my own skin.

“And I think as we talk about this, I've got to contextualize it in the sense that outside of the Church, just in society in general, there are problems with race. Whether you see it or not, whether you accept it or not, there is a problem. There's a problem and a struggle. We've seen it in the UK, we've seen it in the United States. And so for me as a Black woman, I want to come to church and escape that. And so it destroys me when I when the place that I am seeking refuge, I'm getting the same treatment that I'm trying to escape outside.”

“Authentic communion at the congregational level surely means making space for the burdens that come with our national history of racial injustice. Is there any hope for congregations of 'one heart and one mind' if segments of Christ’s body cannot speak their pain or their anger at the persistent inequities that have long defined this national crisis? Surely membership in our covenant community requires more from us than comfortable obliviousness to the realities of our neighbors’ lives.”

“Mourn with those that mourn, comfort those that stand in need of comfort—we preach it. [But] when you have these opportunities to do it, sometimes we get too caught up in talking about things like ‘all lives matter’ versus ‘Black lives matter.’ When Black people, in general, have felt like their lives don't matter for so many years, people can understand, if you start to think about it, why that would be offensive to someone to say ‘all lives matter.’ Because if all lives did matter, then why are we still seeing these type of people dying in the way that they're dying, and being killed and the way they're being killed? And people are still seeking justice. I mean, it's been going on my whole life and years before that. And so, like you said, when people listen, and they really understand what people are saying, whenever they say something like ‘Black lives matter,’ listen a little more deeply and mourn with those that mourn, comfort those that stand in need of comfort. And if they know that you stand by them, then that's really what we're all about. That's what we want to be about.”

“To hear one’s personal accounts of racial injustice is to see. Hearing—careful listening—is more concerned with understanding than responding. We need to hear sincere emotions associated with being feared, disregarded, handcuffed, silenced, and otherwise marginalized for being Black or brown. To hear is to validate—the hurt, the frustration, the loneliness, the uncertainty, etc.”

“We're a divided society right now, and I think there tends to be a retreat into an idea of ‘us vs. them.’ And I think, as Latter-day Saints, who is the ‘us’ when we think about ‘us vs. them’? And that we don't divide, but we embrace, and we don't have a versus, we have a with. I think if we stand with our brothers and sisters—I'm not even talking about politics in any way, I'm talking about human dignity, and seeing the pain, it doesn't mean we all have to agree on a policy solution—[and] not reject the pain because it's uncomfortable or because you think somehow it's the ‘other team,’ whatever the other team is. Not ‘other-izing,’ but embracing, I think is really important—being willing to listen, being willing to recognize that people of color don't just struggle in civic society, they sometimes struggle in the Church as well. They have to do the work of educating the rest of us, or insisting on their own dignity and value when the rest of us should be welcoming those gifts and recognizing them and making sure that just as all are like unto God, that all are like unto us and that we love as God does, without limitation, and that we love in real ways—not just in theory, but in real ways.”

“Growing up in Sweden, I was almost always the only Black girl at church gatherings. I remember when I got to go to girl’s camp for the first time, I can’t even explain my excitement. We met up with the girls from my ward and loaded up the bus. As I got on it and started walking towards my friend, I heard someone yell very loudly ‘Black people sit in the back of the bus’ followed by laughter. . . . Beyond teaching our kids to love all people no matter our differences, talk to them about our history so that when they get older, they will understand that these type of comments aren’t funny.”

“I think where we get the friction from is the expectation. Because we automatically say, ‘Okay, member of the Church equals perfect. Member the Church equals no fear. Member of the Church equals they've never done anything negative.’ And I'm not making excuses, I'm just saying, after I've thought about this for myself, these are some of the thoughts that have come to help me really see what's happening. Because the behavior is what's on the surface, but there's always something underneath. A lot of times, that's usually something that people don't understand, or they don't believe. And a lot of it that I've found personally has been just fear. They don't know. And maybe there are these prejudices, which sometimes we call it racism, and sometimes it's prejudices.”