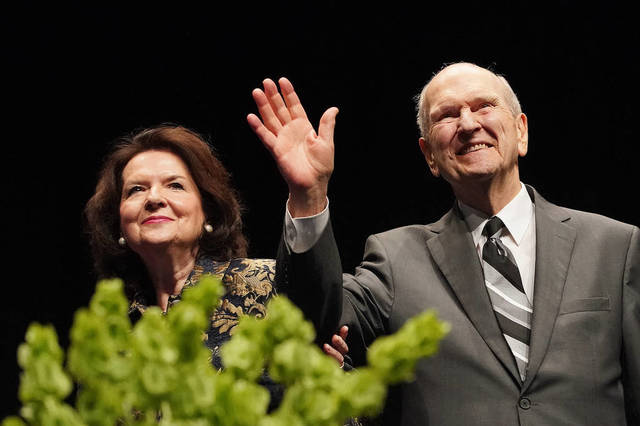 Continuing their whirlwind and worldwide Church ministry, President and Sister Nelson, along with Elder and Sister Gong, traveled throughout the Pacific meeting with Latter-day Saints, prime ministers, royalty, and other faith leaders.

At each stop, President Nelson has shared powerful and personalized messages. Here are some of our favorites.

"Your Wife Is Smiling at Us" 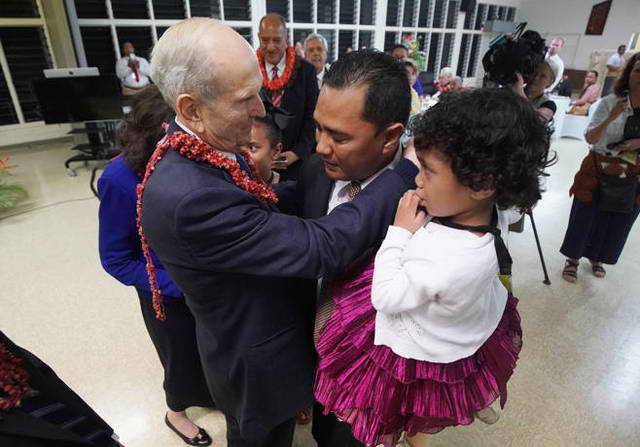 Before giving a devotional in Tonga, President Nelson privately greeted and embraced Mateo Lautaimi and his three daughters: Konisenisi, Bryanna, and Sipinga.

A year ago, Cyclone Gita destroyed Lautaimi's house. A few months later, Lautaimi lost his wife to a sudden illness, but when he learned President Nelson would soon visit the Saints in Tonga, Lautaimi said his heart began to heal, becoming filled with hope.

About meeting the prophet, who told Lautaimi to stay true to the gospel, he says, “I was overwhelmed,” adding that President Nelson also told him his “wife is smiling at us.’”

About such interactions, Elder Gong said, “I have been so deeply touched by how the prophet of God ministers to 10,000 people and a single family that is grieving over the loss of their mother. There is a sense of connection and of covenant belonging together that makes each one feel as though this is for them individually, for their family, and for large groups—countries—at the same time. That is a remarkable thing to feel and see.”

"They Feel Like I'm a Part of the Family"

"I've been going in and out of these islands now since 1976," President Nelson said in a Church News video. "I know some of them and I know their parents and I know their grandparents. They feel like I'm part of the family. . . . I love these people." Wherever President Nelson traveled during his Pacific ministry tour, Latter-day Saints gathered to welcome our prophet "home."

Watch his touching message to these Saints below:

Faith That Stopped the Rain

The weather forecasts for an outdoor devotional in Apia, Samoa, looked grim and gloomy, and rain began falling from the sky as thousands gathered to hear the prophet speak. But shortly after the opening hymn, the rain suddenly stopped. “Thank you for your great faith,” President Nelson said near the end of the meeting. “I wondered if you could do it. You turned off the rain.” Threatening rains similarly ceased in time for devotionals in Tahiti, Tonga, and Fiji.

“When we start the meetings, the rain slows down or stops, but [the people] were there in the rain for two hours waiting for this to happen, waiting to see the prophet and hear what he had to say to them,” Sister Gong says.

"We Are All Brothers"

"I wish all the world was united like we are here now. At the end of the day, we are all brothers and sisters. We are all sons and daughters of Adam and Eve. We are the same," says Abdul Aziz, a survivor of the New Zealand mosque shootings.

President Russell M. Nelson met with those impacted by the March 15 shooting, presenting them with a check for $100,000 from the Church to help their communities press forward. His message during this meeting was clear. “We are brothers. We are brothers,” he said.

President Nelson added, "It's incomprehensible that anybody could do that to another human being. So what can we do? We can pray, we can love, we can minister."

Why Our Church Has Such Incredible Growth

Since his call as an apostle in 1984, the Church in Australia has tripled in size, President Nelson noted during a devotional in Sydney, Australia. It has also continued to grow and expand across the world.

During the devotional, President Nelson told the Australian Saints, “If you want to be happy, choose the way of the Lord."

"I’m a Catholic, but I Know He’s God’s Prophet" 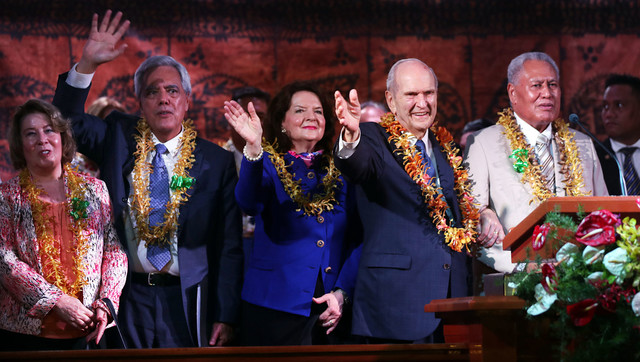 Samoan Head of State Tuimaleali'ifano Va'aletoa Sualauvi II and other Samoa officials welcomed President Russell M. Nelson to their country and attended a Latter-day Saint devotional. Many of these officials were touched by the prophet's message.

Tialavea Fea Leniu Tionisio (John) Hunt, Samoa’s minister for revenue/minister of prisons and rehabilitation services, said following the devotional, “[If we follow his counsel], I think we will have a peaceful Samoa. What the Church of Jesus Christ [of Latter-day Saints] is doing in our country is amazing.”

Hunt, a Catholic, said one’s religious affiliation is irrelevant to learning from President Nelson’s message. “I’m a Catholic, but I know he’s God’s prophet, that he brings peace to us,” Hunt said. “Whatever we do, [Catholics and Latter-day Saints] believe in Jesus Christ, in God, in the Holy Spirit. Hearing [President Nelson has] really filled my heart. I probably am going to use it in my own family, to teach my kids to be brave for what’s going to happen in the future. It’s good that he gave us that warning to help our kids because [our kids are] our future.”

Read what other Samoa officials had to say about the Church here.

Speaking at the Sydney devotional, Sister Nelson said President Nelson told her, “The Lord is just as eager to give you revelation as He is to give it to me.”

Sister Nelson understands this truth from practicing it in her life, and she shared her experience of seeking revelation 14 years ago when she began dating then-Elder Nelson. “To this very moment, I can feel the power and clarity with which the Lord let me know His will, for my potential relationship with Elder Russell M. Nelson. . . . The heavens have opened, and my life would never be the same.”

On Wednesday, May 22, more than 4,000 Fijian Latter-day Saints showed their love for the prophet as they sang "Isa Lei," a song that means "Farewell, dear friend."

Watch the beautiful way these Saints said farewell to President Nelson below.