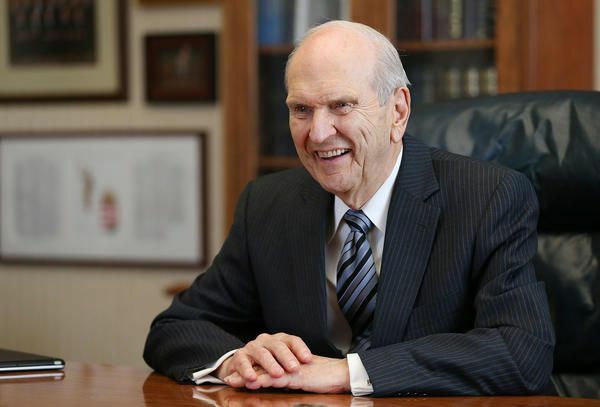 A Letter from the Prophet to a (Former) Unbeliever

Craig Fisher was only five years old when his beloved father died of heart failure. It was a blow that would shake Craig’s faith for decades. He asked repeatedly, “If there is a God, how could He take a five-year old’s favorite person from him?” As he moved into adulthood, the pain and tragedy that Craig witnessed as an emergency response worker further distanced him from believing in a loving Heavenly Father. One unforgettable patient, however, promised Craig that one day he would find answers to his troubling questions.

Almost 45 years had passed since Craig’s father’s death, and as Craig lost his employment in Pennsylvania with a family to provide for, divine answers were still not in sight. In search of new work and a new start, in late September of 2019 Craig traveled several states away to visit his wife’s sister, Missy, a convert to The Church of Jesus Christ of Latter-day Saints, and her husband Glen.

Missy and Glen invited Craig to watch the Saturday morning session of the Church’s October General Conference with them. Craig agreed and was affected when Church President, Russell M. Nelson, spoke.

Craig was struck when he learned that the commanding presence belonged to a 95-year-old, but Craig was even more intrigued that this man was held by Missy and Glen as a prophet of God. In fact, Craig was so interested that after the Conference session ended, he did some research and discovered that Russell M. Nelson was a surgeon who had been central to the development of the heart-lung machine—a machine that opened the door for countless lifesaving and life-prolonging operations.

He discovered that an early heart-lung machine was placed in Philadelphia, Pennsylvania. This machine was employed in a surgery performed on the badly damaged heart of a 42-year old man named Claude, who had contracted rheumatic fever as a child. Claude’s life was extended for ten years, long enough for him to father a son named Craig.

As Craig put these pieces together, he did something he had rarely done as an emergency responder, he began to weep. For the first time, he saw a God who had not stolen a father from a five-year old boy—instead, Craig saw a God who had preserved his father’s life long enough for Craig’s own life to begin. Who better for God to perform this life-preserving and life-giving work through than a man who would become God’s prophet?

As Craig watched additional sessions of Conference, another thought arose in his mind. If God had worked through Russell M. Nelson to preserve the life of Craig’s father, wasn’t it also possible that God could preserve the lives of other children through Craig’s work as an emergency responder?

Astonished at his change of heart and perspective, Craig determined that he would attend church the next Sunday, although Missy and Glen were out of state. Craig went to church and shared his experience before the congregation during a fast and testimony meeting. He was invited to stay for Elders Quorum meeting where the discussion leader announced that they were doing something unusual that day, they would be watching and discussing President Nelson’s recent devotional address at Brigham Young University. In that address, President Nelson addressed the role that revelation had played in his role as a heart surgeon. Craig was again impressed by the idea that God could communicate with his children.

► You'll also like: How General Conference Inspired a Palestinian and a Southern Baptist to Join the Church

Craig had several discussions with the missionaries and marveled at the changes he was experiencing. After dinner with a friend in the ward he was attending, Craig said, “I wish there was some way that I could thank President Nelson for helping to save my father’s life, and for giving me a chance to live myself.” The friend said, “Craig, if you feel strongly about it, take some time, write your story, and we will see if anything comes of it.” Craig did so.

The thank you note reached President Nelson, and in late October, with a baptismal date set, Craig was meeting with his missionaries when a knock came at the door. It was Craig’s friend with a letter. The friend asked Craig to read the name of the special sender and Craig did so. The missionary’s eyes widened, as did those of his family members, Missy and Glen.

The friend jokingly asked the missionaries, “Don’t all of your investigators get a letter from President Nelson?” Joy ensued, as did tears from those present. The contents of the letter were personal—between Craig and the man he now holds to be a prophet of God. Craig’s baptism in November 2019 was a beautiful one. His ward wasted no time putting Craig to work, asking him to serve on the Ward Christmas Party committee—a party that Craig emceed with enthusiasm and, fittingly, plenty of Dad jokes. Craig’s 50th Christmas was an unforgettable one. Nearly 45 years after his earthly father had passed, Craig found his Heavenly Father.