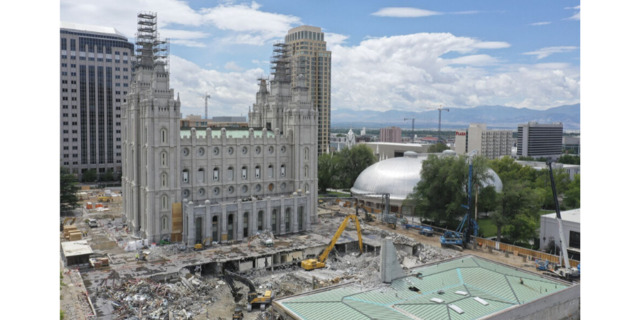 Just over six months ago, the doors of the Salt Lake Temple closed to patrons as the first steps of the temple's renovation began. Now, scaffolding surrounds the temple spires, and the project is just starting.

Deseret News reported on some of the changes that have taken place during the first six months, which includes uncovering the foundation, demolishing and dismantling annexes, and removing ornate finials.

Recently, the sealing wing has been separated from the north side of the temple and its roof has been removed. This wing will be dismantled completely after workers protect the temple walls in the area.

From the chilly February day in 1853 when the prophet Brigham Young drove a shovel into the soil to break ground for the Salt Lake Temple until its dedication in 1893, members of The Church of Jesus Christ of Latter-day Saints were confronted with political hostility from the US government and severe challenges imposed by nature itself. This enthralling book, written by master storyteller Mark Henshaw, tells the narrative of the building of that iconic temple—a place of worship and refuge forty years in the making. Forty Years: The Saga of Building the Salt Lake Temple is available now at DeseretBook.com.