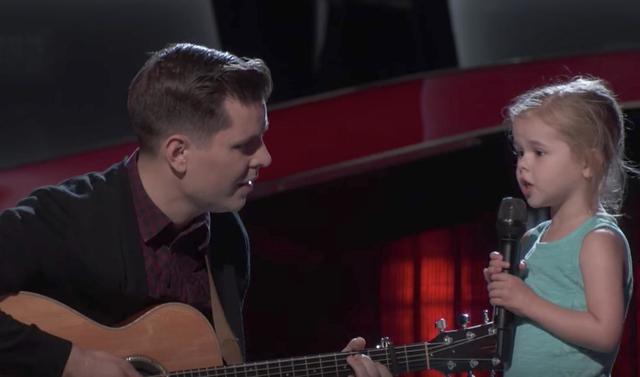 Adam Levine Freaks Out Over LDS Dad on "The Voice": "I Can't Believe It's You. I'm Blown Away"

Dave Crosby, father of LDS 4-year-old YouTube sensation Claire Ryann Crosby, recently appeared on The Voice, proving his daughter is not the only one with talent in the family.

Crosby isn't new to national TV shows. He and Claire performed together on The Ellen DeGeneres Show singing Disney's "You've Got a Friend."

On Monday, Crosby sang Death Cab for Cutie’s “l Will Follow You Into The Dark,” getting Adam Levine, Blake Shelton, and Miley Cyrus to turn their chairs.

While sharing his motivations for singing, Crosby's relationship to Claire was revealed: “I had kind of given up on music about four years ago when I held my little daughter for the first time. And turns out, she turned out to be just an incredible little singer for a 4-year-old and she made a couple viral videos.”

When Levine finally recognized Crosby, he couldn't contain his excitement. "When I had my baby girl, that was one of the most amazing moments of my life," Levine said. "And someone sent me that video and I lost it. I'm so happy you realized that you should never have given up on this because if you had given up on this, that never would have happened. What a beautiful thing. I can't believe that it's you, that dude from the video, standing in front of me right now. I'm blown away."

Claire then joined her dad on stage, charming the judges.

Aside from his YouTube fame, Crosby's voice and talent still moved the judges. “I think that responding to beautiful music should be an impulsive decision,” Levine told Crosby. “The purity and the beauty of your voice is irreplaceable and I really want to be a part of that.”

Crosby ultimately chose to be on Levine's team as he advances on in The Voice.