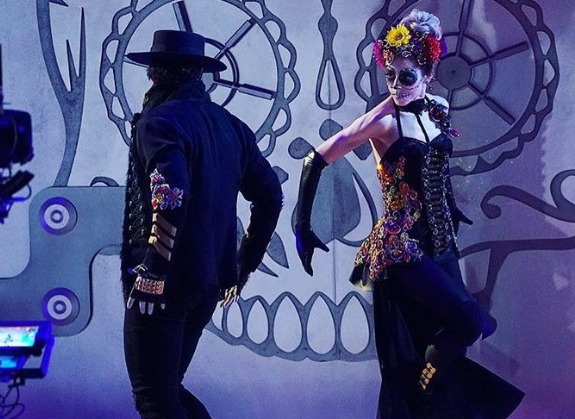 After Displacing Rib, Lindsey Stirling Says Prayer Helped Her with 2 Epic Halloween Dances on "Dancing with the Stars"

After securing a perfect score for her Argentinian Tango last week on Dancing with the Stars, Lindsey Stirling revealed that the dance came with a price. "In last week's dance, in the dress rehearsal, I actually displaced a rib," Stirling said, according to Entertainment Tonight. "Now this week, [I'm] trying to find the balance of taking it easy and yet rehearsing."

This week, Stirling was left in tears from the pain and not knowing whether she could continue in the show. However, Stirling decided to power through the pain and perform two Halloween-themed dances Monday night, a paso doble that earned her a 27 out of 30 points and a group number.

While she impressed the judges, with Carrie Ann Inaba calling her a "beast because that was a really difficult routine,” Sunday night, Stirling was in such pain she couldn't even rehearse, leaving her wondering if she would be able to perform.

Thank you for everyone who prayed for me. I felt those prayers pull me through this painful performance.
Pls vote! https://t.co/HO5d3rGPqppic.twitter.com/YeqkkfovrM— Lindsey Stirling (@LindseyStirling) October 31, 2017