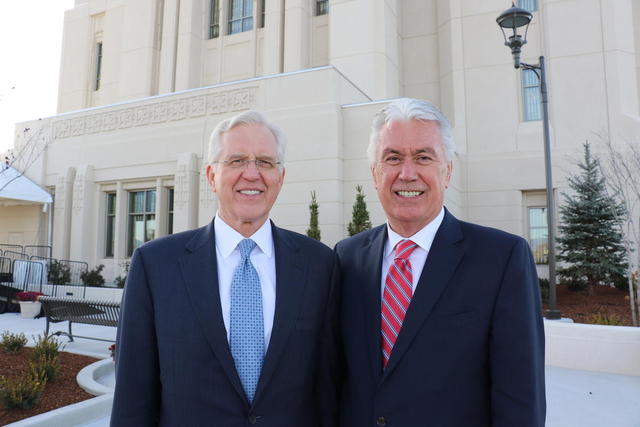 “The house of the Lord and its values . . . stands in such a wonderful spot in our life . . . where we can focus our celestial navigation way beyond this life,” President Uchtdorf said.

In the Treasure Valley in Southwest Idaho runs the Boise Principal Meridian, a longitudinal line that marks the initial point from which other measurements are governed. Established by early Idaho surveyors, the line runs true North with no variation.

Like the geographical line, the Church’s 158th temple — built near the Boise Principal Meridian — has been dedicated and now stands as the fixed point from which the people living in the Meridian Idaho Temple district can find their spiritual bearings.

“I read in the maps and in the records this is the Treasure Valley — it is truly a wonderful place to have a treasure like the house of the Lord placed in its midst,” said President Dieter F. Uchtdorf, second counselor in the First Presidency, during the cornerstone ceremony. “With this jewel placed right here in Meridian, a wonderful piece of His creation has been added.”

Members gathered to the grounds of the temple and in Church buildings throughout the district on Nov. 19 to participate in the dedicatory services of Idaho's fifth temple. During the first of three dedicatory sessions, President Uchtdorf, along with Elder D. Todd Christofferson of the Quorum of the Twelve Apostles and other Church leaders participated in a cornerstone ceremony.