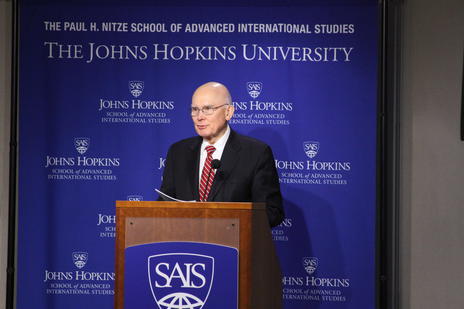 Recently, while giving a speech at Johns Hopkin's about religious freedom, someone from the audience asked Elder Oaks about the Church's policy on LGBT Mormons and how that has affected the suicide rate of those members within the Church. Here's a portion of Elder Oaks' response:

"[P]art of what my responsibility extends to, is trying to teach people to be loving, and civil and sensitive to one another so that people will not feel driven, whatever the policy disagreements, whatever the rules of the church, or the practices of a church, or any other organization, if they are administered with kindness, at the highest level or at the level of the congregation or the ward, they won't drive people to take those extreme measures."

An LDS church apostle addressed what is being called the Mormon LGBT "suicide epidemic" at a recent speech in the nation's capitol.

It is the first time a high-ranking church official has addressed the topic.

Elder Dallin H. Oaks, a member of the Church's Quorum of the Twelve Apostles, was speaking at Johns Hopkins University in Washington D.C. last week about religious freedom when he was asked by a member of the audience, during the event's question-and-answer session, regarding suicides in the Mormon LGBT community.