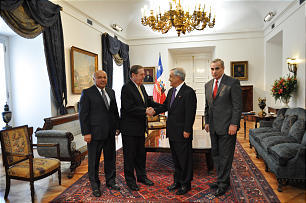 A recent apostolic trip to the southern nations of South America demonstrated the growing ties between the Church and the leaders of many Latin American governments — even as the Church continues to develop in both membership and devotion. On Nov. 14-15, Elder Jeffrey R. Holland and Elder D. Todd Christofferson, both members of the Quorum of the Twelve Apostles, together with Elder Ulisses Soares of the Presidency of the Seventy, participated in a review of the South America South Area. Several training meetings highlighted their tour with priesthood leaders, members and missionaries — along with cordial visits with civic and religious leaders in Chile and Paraguay.

Just over a year ago the Chile Area and the South America South Area were consolidated into a single area consisting of four countries — Chile, Argentina, Uruguay and Paraguay.

Elder Christofferson told the Church News that the dedicated members and Church employees in the area “have made that [consolidation] a success.”