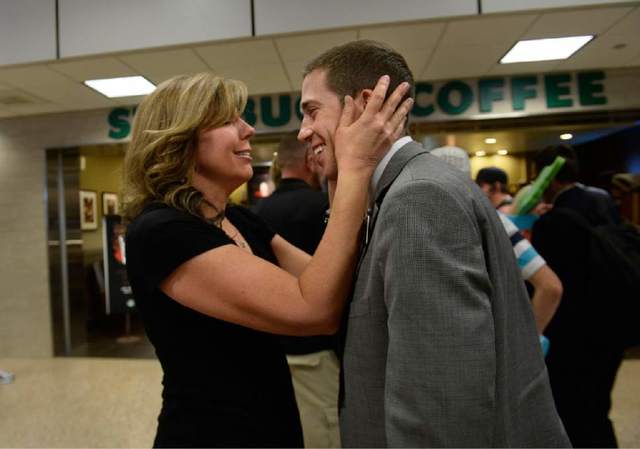 Are Missionary Arrivals at Salt Lake's Airport Getting Out of Hand?

MR says: The hordes of anxious family members, holding signs and waiting for their missionary, have caused significant problems for the Salt Lake airport in the past, causing officials to design a special greeting area for returning missionaries. While this is great news for Utah Mormons, the question still remains, have we let homecomings get a little out of hand?

From flash mobs and dances to cowbells and matching t-shirts, Mormon families think of all sorts of interesting ways to celebrate their missionary's homecoming. But when is it too much? When does the celebration actually become a distraction from remembering the purpose of why we are there--to show our love and appreciation to those who have spent time serving our Heavenly Father.

When Provo attorney Ken Parkinson picked up his daughter from Salt Lake City International Airport, he got more than he bargained for.

He came with his wife and two children, along with a white "Welcome Home" poster for Monica, who was returning from an 18-month Mormon mission in Peru.

His family's display, he said, "paled in comparison to a lot of other families'."

One family hired a videographer, and another wore fake adhesive mustaches — everybody from Grandma to the babies. It's not uncommon to see groups with foam fingers and matching T-shirts. Some have performed flash mobs.