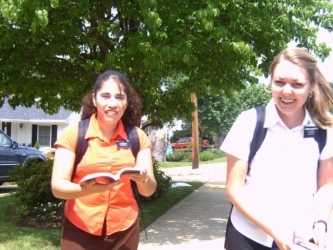 In 2007, The Church of Jesus Christ of Latter-day Saints sent out its one millionth missionary, and as the amount of missionaries serving continues to grow, some may wonder if more women are choosing to go.

According to the book by BYU alumna Melissa Baird Carpenter, titled “18 months: Sister Missionaries in the Latter Days,” in 2005 18 percent of full time missionaries were women.

Brother Bott, who has taught missionary prep at BYU for more than 30 years, said about 20 percent of his mission prep students each year are women, with 60-70 percent in the fall and a reversal of this ratio in the winter semester.

In his mission prep class, Bott’s teachings on the matter reflect that of the prophets.

“Sisters, while you do not have the same priesthood responsibility as do the young men to serve as full-time missionaries, you also make a valuable contribution as missionaries, and we welcome your service,” said President Thomas S. Monson in General Conference, October 2010.