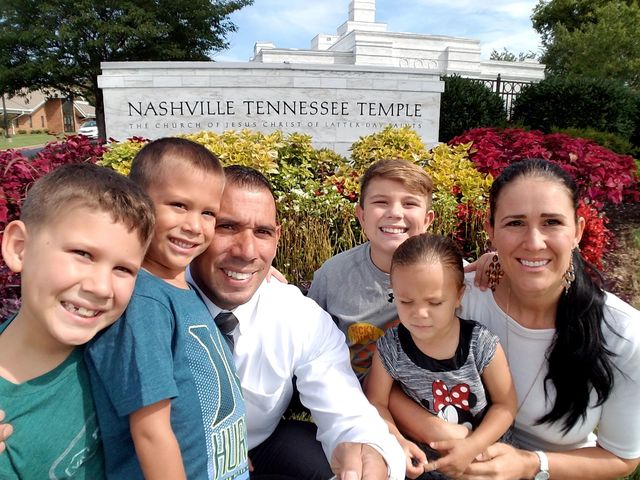 The Alcantar family—mom Ange, dad Sal, and four of their five children aged 2 to 10—are three months into a two-year adventure around the world visiting as many LDS temples and historical sites as they can.

The Alcantar family at the Boston Massachusetts Temple

Since it was only three weeks between the conception of the idea and their date of departure, they plan as they go and depend on locals to point them to must-see spots along their journey.

One Monday, Sal, an entrepreneur and stakeholder in a variety of businesses, realized that his business partners, Marcos Alcantar and Trent Powell, were running the show and didn’t really need him. As soon as the realization hit, he stopped the meeting they were in and said, “Guys, I think I’m retiring today.”

Just two days later, the temple trip plan hatched as he and his wife discussed what was next. They knew they wanted to travel, but they also knew that they wanted to travel with a purpose. “Honestly I didn’t realize how many temples there are…I just thought if we’re going to do this we don’t want it to be a vacation,” Sal said.

How did the kids react?

“At first I didn’t really want to go,” said Drezen (10). “I would be away from all of my friends and it would be a different lifestyle.”

Zander (7) wasn’t too thrilled about the RV. “I thought it wasn’t going to be fun because the RV is a little tinier than our house, and we wouldn’t have a lot of things to do.”

The prospect of being able to do something that not a lot of people do, however, won them over.  “I thought about it more and it was a good opportunity to help me with college,” Drezen said, thinking of the historical sites they visit along the way.

They took off just three weeks later, wanting to make sure they could hit the northern states and Canada before cold weather set it in. They bought an RV, downsizing from their 5,000-square-foot home to the 31-foot-long motorhome, and headed out.

The first couple of weeks were rough. They’d packed way too much stuff and had never dealt with all the issues of RV living. It seemed like every day “something wasn’t working right or we didn’t know how to do something,” Ange said. They spent a lot of time on Google and YouTube trying to figure it all out.

The automatic stabilizer was beyond them, however, and they had to seek out a mechanic. Appointments with RV specialists were booked months out, but they eventually found a traveling RV guy that was able to fix it—mostly. “It’s still been a constant issue,” Ange said.

Everyone was a little stressed in the beginning, and sometimes there were squabbling kids, miscommunications, and other frustrations. Drezen missed his friends, and Zander said, “The worst part is that the RV is so tiny we have to clean more often.”

“We were about ready to go back home and call it good even in the first couple of weeks,” Ange said. “But when we had a family council everybody wanted to stay and wanted to work it out. Everybody kind of recommitted and since then we’ve figured it out. It’s gone a lot smoother.”