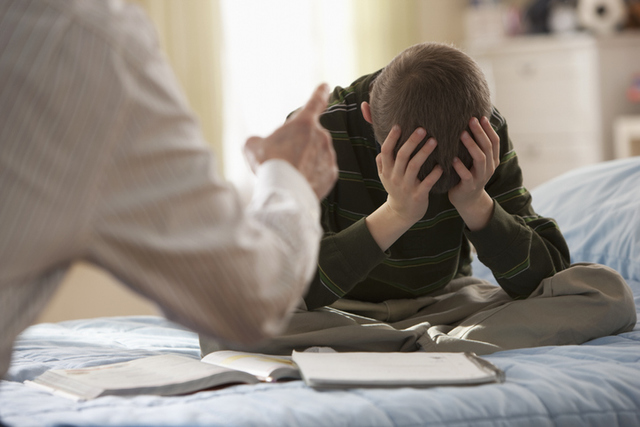 Ask a Latter-day Saint Therapist: My Husband Screams at Our Kids. What Can I Do?

Q: I love my husband dearly and understand he has struggled with anxiety and depression since a youth; however, he often gets quite angry and yells at our children. He yells things like "I'm going to beat you," or tells them to "Shut up" or "Get the freak out of my face." While I know he will not physically harm our children, his tone of voice is a great concern to me and has raised concern with some other family members.

When I confront him he downplays it or says he was having a panic attack. How can I best support him as he navigates his depression/anxiety while also being [influential] with how he talks to our children? We do have a pretty good marriage, and for the past 8 years, this has been a serious concern for me. I know I can't force change upon him, and I am trying to be patient, but our sweet kids do not deserve to be spoken to like that. I can already see it affecting them.

A: That’s rough. It’s a hard place to be, torn between supporting your husband and protecting your kids from his anger. It certainly has an effect on them and contributes negatively to the overall spirit in your home (see 3 Nephi 11:29).

Irritability is one of the symptoms of depression and often accompanies high anxiety as well. This is not to make excuses for your husband. We are all responsible for our own behavior, and overcoming his temper is part of what he’s meant to learn and accomplish here.

What is your husband doing to tend to his mental health needs? If you know he’s suffered since childhood, I’m assuming he told you as much. So, if he’s aware and humble enough to admit a struggle with anxiety and depression, is he actively seeking help to alleviate the symptoms? A skilled counselor can help him develop new ways of thinking and behaving so that he’s not so overwhelmed and doesn’t deal with his stressors through anger. If he were going to get this under control on his own, he would have done so by now. It’s time for support.

Many people, especially men, who struggle with anxiety, depression, and anger downplay the seriousness of the struggle and its effects, as your husband does. This often stems from insecurity and an accompanying fear of rejection or judgment.

The best approach would be to speak to your husband when he’s calm, as he will struggle to hear you without defensiveness when he’s upset. Tell him that you love him and that you appreciate the good man that he is. Express empathy for how stressful life and even parenting can be and ask him how he feels about these things. Validate and show understanding for his emotions. Then express concern that his outbursts are driving a wedge between him and the children and that you worry that they’re taking it hard.

You need to be loving but firm. If he makes excuses or minimizes, be prepared to push back a bit, holding him accountable. Let him know that you won’t think less of him for owning up to his behavior but that you’ll admire him more for being accountable and making specific plans for change. “I’ll try harder” is not a plan. “When I’m angry, I’ll stop and calm down before engaging” is a plan. “I’d like to meet with someone next week to get this under control” is a plan. “If I lose my temper I will apologize to the kids, hold them, and tell them that it’s my fault and they didn’t deserve it” is a plan. Don’t be afraid to push until you get a specific plan of action.

But what about his defensiveness? One trick I’ve discovered is that I almost never tell a person that what they’re doing is wrong. Why? Because they believe it to be right based on their intentions and desired result, so they will defend their position. Instead, I ask people what they’re trying to accomplish. They tell me, then I ask if what they’re trying is working. Generally, they’re able to admit that it’s not, and I gently ask if we can explore other approaches.

Try this with your husband. Ask him what he’s trying to accomplish with the kids, listen, then ask if it’s working. It may be that yelling at them does work if he wants to be left alone, so follow up with “What kind of relationship would you like to have with them?” and if his approach is creating that. Then ask him what he’ll do instead and, if he’s short of ideas, you could offer some suggestions.

Mind you, he’s probably not going to like any of this. Regardless of the approach, most people don’t enjoy looking at their shortcomings. But what I’ve outlined here will increase your odds of success in helping him recognize the need for change and to start the process. As always, be humble and prayerful. If the Spirit tells you to do it differently, follow Him. God bless you.