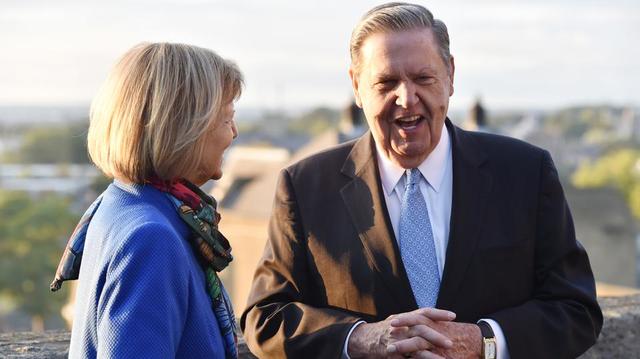 At Windsor Castle, Elder Holland Shares the Key to LDS Survival and Success

On September 9, 2017, Elder Jeffrey R. Holland spoke at the Second Windsor Conference on Religious Persecution, following up on his speech last year about religious persecution in LDS Church history and how that relates to modern-day refugee experiences.

“How to turn around, walk proud, stop being seen as a victim, and become successful — that’s the Mormon experience. It's a teaching experience from the Mormons as a gift to the refugees of the world. That's why I asked him to come,” Baroness Emma Nicholson said about her decision to have Elder Holland speak, according to Mormon Newsroom.

"'I had actually seen a light, and in the midst of that light I saw two Personages, and they did in reality speak to me; and though I was hated and persecuted for saying that I had seen a vision, yet it was true; and while they were persecuting me, reviling me, and speaking all manner of evil against me falsely for so saying, I was led to say in my heart: Why persecute me for telling the truth? I have actually seen a vision; and who am I that I can withstand God, or why does the world think to make me deny what I have actually seen? For I had seen a vision; I knew it, and I knew that God knew it, and I could not deny it, neither dared I do it; at least I knew that by so doing I would offend God, and come under condemnation.'

"In a sense, that passage is the key to Latter-day Saint survival and eventual success. Individual conviction leading to purposeful action, no matter how great the odds against us, is not only our story but the story of many individuals and many institutions that have made a difference in the world.

"Latter-day Saints continue to follow this pattern worldwide. They seek a spiritual witness, ask for divine help, and strive to see that their actions concord with divine will. Such spiritual conviction combines faith and works in a way that can move mountains. An ancient prophet who lived on the American continent some five centuries before Christ is recorded in the Book of Mormon as saying:

“'Wherefore, we search the prophets, and we have many revelations and the spirit of prophecy; and having all these witnesses we obtain a hope, and our faith becometh unshaken, insomuch that we truly can command in the name of Jesus and the very trees obey us, or the mountains, or the waves of the sea.'

"This personal testimony of God’s existence, His power, and His hand in our daily lives is the fount from which Latter-day Saints draw strength when faced with life’s challenges, great or small. It is what moved the Latter-day Saints on their forced religious migration—sometimes on foot pulling handcarts across the Great Plains and into the Rocky Mountains—and it is what propels our members today to face life’s vicissitudes with courage, determination, and hope."